We need mass testing for coronavirus. This is how to do it 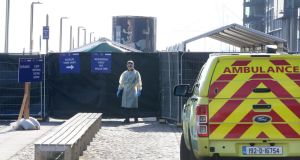 Measures taken to suppress Covid-19 in Ireland have prevented unmitigated transmission and 50,000-75,000 deaths. But the virus is still here. We will be living with it for 12-18 months, until a proven vaccine is widely available. We need to move to a stage where we can function as a country – socially and economically. We need an exit strategy.

This is not a case of “wait and lift”. When the curve flattens, we cannot simply lift restrictions and hope for the best. If we do, virtually every scientific prediction or historical precedent shows we will face a second wave of infections. This will lead to further lockdowns, possibly in September or sooner. We cannot spend the next 12 months in a cascade of reactionary lockdowns. We need a smarter strategy.

Writer and journalist Tomas Pueyo has coined the term “hammer and dance”. Lockdown is part of the ‘hammer’ phase of suppression, when it is necessary to flatten the curve. The challenge is to transition to the ‘dance’ stage, where the reproduction number can be kept low through measures without require lockdown or heavy social distancing. We will be in the hammer stage for another four to six weeks, and by then we need a plan the dance phase – to keep the curve flat. There is only one civilised way to maintain the dance: mass testing. Not just mass testing – smart mass testing.

This is not merely a case of scaling up testing capacity – we need to search, identify and isolate all potential cases and contacts. Individuals with symptoms (primary cases), and their families or housemates, would be quarantined and tested. Rigorous contact tracing would identify, isolate and test all contacts (secondary cases) and tertiary and quaternary contacts. Individuals would be inconvenienced for a matter of days if they test negative, or weeks if they don’t. But the population would continue as normal.

The problem is that our apparatus of state was not built to respond to a situation of this scope. We need an extraordinary approach to manage an extraordinary situation. Drawing on expert knowledge and experience from the foot and mouth crisis, the Tony Blair Institute for Global Change produced a White Paper offering a road map for a mass-testing infrastructure. It requires a dedicated and empowered structure, composed of leaders from industry and academia, with the ability to move quickly and autonomously, but with the full resources of state.

A task force could be led by a dedicated minister for testing at senior cabinet level, reporting directly to the taoiseach. The chief scientific adviser would assemble the task force and work with a programme manager, recruited from the highest echelons of the private sector, who would aggressively pursue ambitious testing and tracing targets (at least tens of thousands of cases per day). It would include business leaders from pharma and biotech, the State’s leading laboratory-testing professionals, directors of our contact-tracing operation, and scientific experts. Our best minds in immunology, microbiology, biochemistry and molecular biology would be included; and where necessary experts would be recruited from abroad. It is important to remember that mass testing is a security and economic issue, not just a health issue. It may be prudent to utilise the Department of Defence for this purpose (avoiding the constitutional issues of a new ministerial portfolio).

The task force would be directly responsible for the mass procurement, and production, of reagents and equipment. Where reagents are lacking, our task force would draw on recent research adapt SARS-CoV-2 strategies using novel protocols that do not require certain reagents or even RNA extraction. It would work to identify new, unconventional and faster testing methodologies and find ways to scale them to mass-production levels. It would directly co-ordinate and oversee all testing sites, including national testing centres, industry sites, hospital testing labs and, if necessary, university labs.

It would centrally allocate resources, prioritise geographic areas, ensure targets are met, and collate all data. It would work collaboratively with research groups to develop antibody-based population testing for assessing the population’s overall immunity. Crucially, the task force would be responsible for rapidly assessing and assimilating the latest scientific research from our international peers at the frontier. It would interact closely with the national epidemiological team and the chief medical officer to provide quality data to inform predictive models, and advise the taoiseach on restrictive public-health measures if necessary.

Ireland was ahead of the curve in implementing lockdown. But we are only halfway there. The UK delayed lockdown by two weeks because their government used a narrow section of expert advice that suited its agenda, ignoring international scientific consensus and the realities on the ground in Italy. We must not allow ourselves to make the same kinds of mistakes at the next phase.