We must empower communities blighted by drugs, not blame them 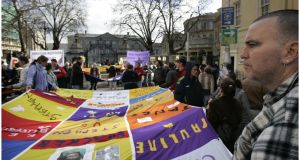 The National Drugs Crisis protest at the Dáil in 2006: the new national drugs strategy will be published this summer; it comes 21 years after the first such “national statement” from central government on drugs. Photograph: Dara Mac Dónaill

A friend, to whom I wish I’d been a better friend, died recently.

Dara Quigley was a writer, a merciless observer of Irish society, bright as a button, gorgeous, infuriating – and recovering from drug addiction.

In one of her final pieces, published by the Dublin Inquirer in March, she spoke of her struggles to assert her right to a good life.

“I [have] just about enough strength to hold on to my sense of self, and to think that maybe a better life isn’t just something I deserve but something that I and every other recovering addict has a right to.

“Today I can almost safely say I believe that. And that is one of the unseen struggles of recovery from addiction. A constant battle between what you know is true, a desire to make it out the other side, pitted against a society which views addicts – particularly women addicts – as moral hazards to be contained and controlled.”

Dara’s death last month silences a vital young woman from whom we could have learned so much. I wonder what she would have said about the new national drugs strategy, which Minister of State Catherine Byrne will publish later in the summer. It will govern drugs policy until 2020.

It comes 21 years after the first such “national statement” from central government on drugs. The First Report of the Ministerial Task Force on Measures to Reduce the Demand for Drugs was published in October 1996, by the then junior minister Pat Rabbitte.

Two decades on and, one hopes, thinking on the issue has come of age. Indeed, in a recent draft seen by The Irish Times, many once unthinkable policies are planned.

A pilot, medically-supervised injecting room is on the way in Dublin; wider distribution of the overdose-treatment drug, Naloxone, is recommended; and, perhaps most controversially, the decriminalisation of all drugs, including heroin, cocaine and cannabis, for personal use, is mooted.

These plans will save lives, and will be pointed to as proof of how far our thinking has travelled. A side-by-side reading of the strategy, with Rabbitte’s 1996 document, however, reveals other depressing shifts.

On the first page of his report, Rabbitte said Dublin’s 8,000 heroin addicts “are concentrated in communities that are also characterised by large-scale social and economic deprivation and marginalisation. The physical/environmental conditions in these neighbourhoods are poor, as are the social recreational infrastructures... Life in these estates for many has become ‘nasty, brutish and short’. This cannot continue.”

Most drug users, he said, “come from severely disadvantaged backgrounds, not of their making.”

The majority living in the communities are not drug users, however. “Overwhelmingly they are seeking better futures for their children and take legitimate pride in the strengths of their community

The communities directly affected had “begun to protest, take action themselves and to press Government for new, more effective policies.”

Throughout, Rabbitte talks of involving and empowering those communities, which had “built up considerable, valuable experience” to tackle the crisis at local level.

On foot of the report, 11 local drugs task-forces were established – 10 in Dublin and one in Cork, in some of the poorest communities in the State – including north and south inner-city Dublin, Ballymun, Ballyfermot and Clondalkin, and north Cork.

Each had cross-departmental representation, as well as local gardaí and members of the community. They took an interagency approach to providing treatment and building communities’ own capacities. Community employment, childcare, adult literacy classes, parenting courses, meals-on-wheels were among the schemes established.

Two decades on, with 20,000 opiate users in Ireland, 3,000 injecting drug users in Dublin, one drug overdose death a day and a lethal level of gangland violence beyond anything imagined in 1996 most in the sector agree, local drugs taskforces have become ineffective as statutory agencies drifted away.

Simultaneously, funding for community projects in some of the areas worst devastated not only by drugs, but more recently by eight years of extreme austerity, has been slashed.

Social policy analyst Brian Harvey has documented cuts to the community sector of up to 85 per cent between 2008 and 2014. Some projects were subsumed into bigger ones. Others limp on. Many closed.

Depressingly, the forthcoming drugs strategy hardly mentions community, much less of empowering communities. Rather it aims to “target interventions at communities”.

“It is important,” it says, “to provide tailored interventions to effectively address the needs of those who face a higher risk of substance misuse because of their lifestyle or because they belong to a specific group or community of interest.”

Of course, empowering impoverished communities is fraught with political risk, as we have seen, in the anti-water charges movement and the mushrooming of housing action campaigns. Far easier to blame communities for their poverty, for their drugs crisis, than to control the consequences of empowering them.

I do not know, but I suspect Dara would see in the forthcoming strategy a preference for painting communities devastated by addiction as moral hazards, to be contained and controlled.

I know she would be loud and unapologetic in demanding they not only deserve better lives, but also that they be empowered to make better lives, for themselves.

Time to raise taxes not cut them

Harry McGee: Don’t judge this government on its first 100 days

1 ‘It was pitch black’ - Rescued teenager describes night afloat with her cousin in Galway Bay
2 Aaron Brady, the man who said with pride he was a cop killer
3 Conor Pope’s staycation diary: ‘It’s like I’m staring at a Polaroid of my childhood holidays’
4 Irish team wins international competition with dementia app
5 Garda killer Aaron Brady will be almost 60 by time he leaves prison
Real news has value SUBSCRIBE