Jeremy Corbyn to order Labour MPs not to block Brexit 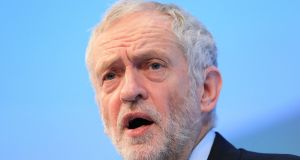 British Labour leader Jeremy Corbyn will order his party to vote in favour of triggering article 50, in a move likely to prompt a rebellion of about 30 Labour MPs, including several frontbenchers.

The Labour leader signalled on Thursday that he would impose a three-line whip if the British government lost its supreme court challenge and brought a Brexit Bill to parliament.

However, dozens of Labour MPs, especially those with largely urban constituencies that voted for the UK to remain in the EU in last June’s referendum, are known to be agonising about whether to defy the party line.

Corbyn made clear in a broadcast interview that he would ask Labour MPs to vote for article 50 because the party would not block the Brexit process.

Asked by Sky News how he would handle any Brexit legislation in the House of Commons, after the Guardian revealed that some shadow cabinet ministers were considering voting against it, he said: “It is very clear. The referendum made a decision that Britain was to leave the EU.

“It was not to destroy jobs or living standards or communities, but it was to leave the EU and to have a different relationship in the future.

“I’ve made it very clear the Labour Party accepts and respects the decision of the British people. We will not block article 50.”

When asked if that meant a three-line whip, which is an order to MPs to vote for the Bill, he replied: “It means that Labour MPs will be asked to vote in that direction next week, or whenever the vote comes up.”

Four shadow cabinet ministers, including close Corbyn loyalists, and several junior frontbenchers told the Guardian they were struggling to back the bill in principle.

One shadow cabinet minister said: “I’m concerned that if we wave article 50 through, my constituents will go crazy.”

Another said: “When the pain hits, as it will, and when people lose their jobs, you need to be on the right side of that. I don’t think we should vote to trigger article 50.”

A number of Labour MPs are undecided on the issue and could base their vote on whether the party manages to secure changes to the legislation.

Clive Lewis, the shadow business secretary, said he had serious reservations about the Brexit plan put forward by British prime minister Theresa May earlier this week.

“I will be looking very carefully at what we as an opposition can extract in the way of guarantees from the government before voting for article 50. As things stand, I’m not seeing enough from Theresa May yet.

“Yes, 17 million people voted to leave the EU. But ‘leave’ to what is the $6 million question and so far the government’s answer is totally unacceptable.”

Catherine West, a shadow foreign office minister, and Daniel Zeichner, a shadow transport minister, have both publicly said they will not vote for article 50.

If, as expected, the government loses the court appeal, it could table legislation giving it the power to start the formal divorce process with the EU as early as next Wednesday.

Labour rebels estimate that about 20 to 30 party MPs, including some frontbenchers, will vote against triggering article 50, along with the SNP and the Liberal Democrats.

However, the government is almost certain to have a majority for passing the legislation.

There is widespread concern among Brexit sceptics that the government will try to force through its Bill in as short a time as possible, leaving just a few days for parliamentary debate.

MPs with concerns about Ms May’s plans are already crafting a slew of parliamentary amendments to shape the form of Brexit, although the government is likely to write a short Bill to try to minimise changes.

Labour is understood to want to force the government to commit to regularly consulting parliament about the progress of Brexit negotiations.

Some Labour rebels have discussed an amendment calling on the government to publish an impact assessment, with an economic analysis from the British treasury about the effect of Brexit on the country’s finances.

The tone of the Brexit referendum campaign, and the subsequent public debate, have exposed a deep rift in the Labour Party, broadly between Labour MPs representing Leave constituencies where there are concerns about immigration and those in London and metropolitan seats where the majority voted to Remain.

The shadow Brexit secretary, Keir Starmer, who accepted a job in Mr Corbyn’s shadow cabinet after the bitter party leadership campaign last summer, has sought to straddle the divide and represent the concerns of both Leave and Remain voters.

In his response to Ms May’s 12-point Brexit plan in the House of Commons on Tuesday, he welcomed her commitment to seeking tariff-free access to the single market, which he said represented a victory for Labour.

He also suggested she was aiming to avoid a hard Brexit.