We deserve a secular State for a pluralist people 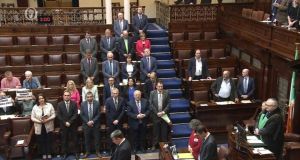 Ireland urgently needs to separate church and State, to protect equally everyone’s right to freedom of religion or belief.

The recent census showed that one in 10 of our population identifies as having no religion, more than all minority religions combined, and the real figure is probably much higher.Yet we have grown up with religious discrimination that is so prevalent that it is almost invisible, perpetuated by a nod and wink political ethos of religious subservience.

Until relatively recently, homosexuality was illegal, divorce was unconstitutional and the Virgin Megastore was fined in court for selling a condom.

Today, we still have religious oaths that prevent a conscientious atheist from being president, a judge, attorney general, taoiseach, tánaiste or chair of the Dáil or Seanad.

The Catholic Church runs most of our State-funded schools and hospitals, with exemptions from our equality laws that allow them discriminate on the grounds of religion. We are often told that this for historic reasons, but the Government plans to gift a new €300 million National Maternity Hospital to the church.

Most State-funded schools can give preference to Catholics, and can evangelise non-Catholic children by integrating a Catholic ethos throughout the curriculum. Atheists and religious minorities cannot access the teaching or medical professions, in State-funded schools and hospitals, without religious discrimination.

The Constitution still refers to the place of women in the home, and pregnant women still have to travel abroad for abortions. Religious bodies can solemnise marriages while also promoting political causes, but secular bodies are forbidden from doing so.

Earlier this month, our parliament voted to force all TDs to stand for a Christian prayer asking “Christ Our Lord” to direct every aspect of their work. And our police have just investigated a complaint that Stephen Fry blasphemed on our national television station, which broadcasts a Catholic call to prayer at prime time every day.

We are so accustomed to this avalanche of religious discrimination that we do not realise how outrageous it is.

Atheist Ireland lobbies at the United Nations and Council of Europe for Ireland to respect the human rights treaties to which it has signed up. In recent years, 10 international human rights bodies have told Ireland that our schools breach the human rights of atheists and religious minorities.

In the Louise O’Keeffe case, the European Court told Ireland that, regardless of who runs the schools, the State remained responsible for protecting the human rights of pupils.

Nils Muiznieks, Council of Europe human rights commissioner, said he had never seen anything like the Irish school system, where patron bodies are holding the State hostage.

Waleed Sadi, United Nations economic, social and cultural rights rights chairperson, compared Ireland to a developing country, saying we are unique in Europe where separation of church and state is almost sacrosanct.

Nigel Rodley, the late United Nations Human Rights Committee chairperson, linked many of our social problems to the Catholic Church, and said our law treated pregnant women as vessels.

In contrast, Pakistan, on behalf of Islamic countries where blasphemers face the death penalty, has cited the Irish blasphemy law as best practice internationally.

We urgently need a secular Constitution, parliament, government, education system and healthcare system.We need one law for all, with no discrimination or privilege for either religious people or atheists.

The most substantive religious discrimination is in our schools, against parents, children and teachers from atheist and religious minority backgrounds.

But the current plans from Minister for Education Richard Bruton will simply fine-tune and reinforce the discrimination that already exists.

The Minister is focusing on fine-tuning the relatively small problem of access, but is not addressing the far more important problem of discrimination and evangelisation within the schools.

Even if the State provided the 400 multidenominational schools that it hopes to within 15 years, that would still be a small proportion of the more than 3,000 religious-ethos schools.

And the church is trying to negotiate a stronger Catholic ethos in the majority of schools that it would retain. That would leave most atheist and minority-faith parents in an even worse position than now.

The Irish population has moved on. We are no longer in thrall to the Catholic Church. But our politicians, laws and Constitution need to catch up with the people.

Michael Nugent is the chairperson of Atheist Ireland