Are Protestants closer to the ideal of model citizen than Catholics? 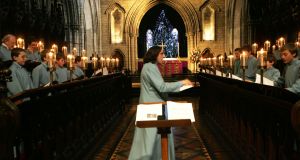 The 1999-2000 European Values Study – which included a look at citizenship – came up with something surprising about Protestants in the Republic of Ireland. Analysts who studied the results concluded that while Protestants were somewhat less engaged in the political process, “… particularly in the realm of civic morality, they are closer to the ideal of the model citizen than are Catholics”. Why that might have been, of course, is a matter of conjecture – a fusion, perhaps, of high education levels, theological robustness, cultural imperatives – or indeed all that experience running parishes as mini-local government. Whatever the reason, it seemed to run counter to the accepted wisdom about Protestant aloofness from – if not active distaste for – independent Ireland.

But from an examination of the history of southern Irish Protestantism since independence from the perspective of a half-full, rather than a half-empty, glass, things look a little different. Much of the historiography and the literature has had a profoundly negative tone. That has coloured the view of this people as historically socially introverted, quiescent, hankering after a Britishness that was no longer theirs to share.

There are large elements of truth in this stereotype – after all, stereotypes are stereotypes often for good reasons. But buried in the history of the 1920s, 1930s, 1940s and 1950s is another story, a different narrative which, when excavated, goes a long way to explaining why this formerly dominant minority survived and even thrived – and maybe were good citizens, too.

The provost of Trinity College Dublin, writing to an English friend a few days after the Anglo-Irish Treaty’s signature in December 1921, said: “Well, let us hope that the murdering is over, and that southern Ireland may prosper a Dominion!” John Henry Bernard went on: “I confess that I don’t like to think of myself as a ‘colonial’! Yet that is what it has come to.” Maj Somerset Saunderson of Cavan, son of former unionist leader Edward Saunderson, sighed to Hugh Montgomery: “Now I have no country.” They had to start about finding one.

At first, they looked for alternative national allegiances and loyalties. One was the imagination of a “Protestant Free State”, royalist if not unionist in nature. In that world George V was the king of Saorstat Éireann; the Cosgrave administration was, in Bernard’s words, “The King’s government in Ireland” – not an entity that Cosgrave and his ministers might have acknowledged. This imagined Ireland saw what it wanted to see, and said what it wanted to say; a place where architecture and street names were recognisably Protestant, where social organisations such as yacht and golf clubs and professional bodies carried a “Royal” prefix, and where the king’s head was still on the coinage, even if, from 1928, he had to slum it with pigs and chickens. Where there were changes, they could be simply ignored – in private discourse, Dún Laoghaire was still Kingstown, Cobh was Queenstown, and Port Laoise was Maryborough. Another way was to emphasise the lineage of the Church of Ireland as predating the Reformation, retrofitting St Patrick into Irish history as a sort of Protestant, and celebrating, in 1932, the 1,500th anniversary of his landing with the trappings of a Patrician state – a flag and an anthem.

Where Protestants did participate in the State, it was largely to protect their privileges, economic and social. The State colluded in this – it was not in its interests to alienate a prosperous part of the population that might up sticks, taking with it not only its talents but its shekels also.

But if Protestants were to be admitted to citizenship, how was this to be done? They had formal rights, of course – but these needed to be grounded in acceptance. This is where things got tricky. It has been pointed out that in the southern United States, segregation was not just a matter of formal rules. Take buses, for instance. Blacks sat at the back, whites at the front. But there was no fixed demarcation line; it came down to how far back whites decided to sit. This reflects the dilemma facing many southern Protestants. How far back would Catholics sit in the new State? The omens weren’t too promising. When the Leader newspaper in April 1944 could say that “Protestants cannot understand that this is a Catholic country”, it was an explicit rejection of the idea of the bus as omnibus.

The reaction of southern Protestants, especially in the Church of Ireland, was to construct a form of “belonging”, of citizenship, that would avoid these difficulties. That construction was one of “moral citizenship” – the Archbishop of Dublin’s view in 1932 was that the obligation upon Anglicans was “…to serve the highest interests of the nation, and to uplift its standards of character and conduct”. This manifested itself in such as crusades against gambling (the Irish Hospitals Sweepstake was a particular target), and in an outward-looking internationalism.

Faced with a new and unfamiliar political dispensation in 1922, southern Protestants had to juggle with the potentially disastrous disconnect between a genuine place-based patriotism, an uneasiness with an ascendant “National Catholicism”, and an inherent otherness that seemed almost embedded in their DNA.

Culturally, Protestants had quite a lot going for them to counter these centrifugal forces. They possessed a rather generous a la carte menu of “belongingness” to draw from, ranging through a geographical form of identity, denominational and religious loyalties, clinging to empire and royalism, and out into a strong sense of ethical and moral superiority and espousal of what we would now call “human rights”.

This allowed them to build, Lego-like, a congenial citizenship as circumstances demanded. If Catholics were born Irish, and Protestants had – in Edna Longley’s phrase – “…to work their passage to Irishness”, this actually gave them more freedom and flexibility to construct their own sense of citizenship than those who had perforce to start with a preformed and rigid Catholic-nationalist template. And all that may go some way to explain the results of the European Values Survey.