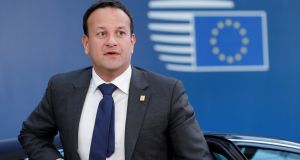 Taoiseach Leo Varadkar took a bold step on to the international stage this week as one of the leading figures in a revolt against German chancellor Angela Merkel which torpedoed her initial plans for the carve up of the top European Union jobs. His decisive intervention in the process helped to scupper a deal hatched between Merkel and French president Emmanuel Macron at the G20 summit in Japan last week to give the European Commission presidency to Dutch Socialist Frans Timmermans.

That deal caused fury in the European People’s Party (EPP) of which Fine Gael is a member and has been dominated by Merkel for more than a decade. It was no surprise that the EPP prime ministers from eastern and central Europe were opposed to Timmermans but Varadkar’s vocal opposition was unexpected.

Merkel was outvoted eight to one by her fellow EPP prime ministers when she tried to get backing for her original deal. It was a devastating blow to her authority and one she is unlikely to recover from as she sees out the remainder of her term as a lame-duck German chancellor.

The eventual outcome of three days of wrangling was that instead of having to settle for the most minor of the four top EU jobs the EPP ended up with two of the top positions, German defence minister Ursula von der Leyen as president of the commission and Christine Lagarde as head of the European Central Bank.

Varadkar’s strong stance has increased his standing in the EPP, which is still the biggest force in EU politics despite losses in the European elections, and made him a force to be reckoned with in the party. The downside is that he has made enemies in the other groups, particularly the Socialists, for his role in blocking Timmermans and Merkel is hardly likely to forget it.

Interestingly Fianna Fáil leader Micheál Martin launched a scathing attack on Varadkar at the height of the negotiations and backed Timmermans for the top post. That showed not just that European and Irish politics are intertwined but also that Fianna Fáil and the Labour Party are working in tandem against Fine Gael at every level.

It is no secret that the ulterior motive for Varadkar’s unexpectedly strong defence of the EPP position was the hope that Michel Barnier, one of the party’s key figures, would come through the middle as the compromise candidate for commission president. As the lead Brexit negotiator for the EU Barnier has worked very closely with the Government and has been unwavering in his support for the Irish position. From this country’s point of view a more ideal candidate for commission president could not have been imagined.

It was also no secret that Manfred Weber, the official EPP candidate for the post nominated under the so-called spitzenkandidat process, was never going to make it. Macron was implacably opposed to him and other leaders were worried that he did not have the executive experience for the job.

With Weber a dead duck from the start the Irish strategy was to press Barnier’s claims if the opportunity arose. That was one of the reasons Merkel’s willingness to ditch Weber in favour of Timmermans prompted such a negative reaction from Varadkar.

“The initial Franco-German stitch-up was all to do with internal German politics. Merkel wanted to keep her coalition with the Social Democrats sweet by facilitating Timmermans and forgetting about the wider interests of the EPP,” said one EU insider The other eight EPP leaders simply wouldn’t have it so it was back to the drawing board.

Merkel then dug her heels in and made it clear that in no circumstances would she accept Barnier. She has never been a fan of his and had backed Juncker against him for the position in 2014. The way out was eventually suggested by Macron, who proposed von der Leyen in tandem with Lagarde. The acting Belgian prime minister Charles Michel, from the Liberal Renew Europe group, emerged as the popular choice for the third key post of European Council president.

The final line-up is satisfactory from an Irish point of view. Von der Leyen may not have Barnier’s detailed grasp of Brexit but, the daughter of a former commission official and German politician, she has expressed herself on the issue in no uncertain terms, describing the Brexit debate in the UK as a “burst bubble of hollow promises . . . inflated by populists”.

Michel, who will succeed Donald Tusk, is better known to Irish politicians and officials and his highly regarded by them. “I am really happy to see Charles Michel in there as president of the council,” said Varadkar, describing him as “a friend of Ireland”.

Of course, the process is not finished. The line-up will have to be ratified by the European Parliament and that will almost certainly involve a fight. There is anger across the parliament at the way the spitzenkandidat process was abandoned when the pressure came on.

The fact that two of the four top positions are being given to women and that there is a reasonable geographical and party spread may be enough to get the deal through the parliament but, as the events of the past week have shown, anything can happen.

1 If you are young and live outside Dublin you could be in trouble
2 Bobby Storey: The IRA's planner and enforcer who stayed in the shadows
3 Ruth Negga: ‘People who say they don’t consider skin colour... are you f**king blind?’
4 Fintan O’Toole: Future of the American republic is in grave danger unless Trump is defeated
5 Patrick Freyne: You endearingly sentimental sociopath, I’ve just the show for you!
Real news has value SUBSCRIBE