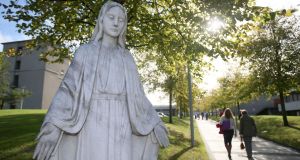 St Vincent’s University Hospital in south Dublin is currently owned by the Sisters of Charity, who are to cede control to a new private charitable entity.

Controversies about the role of the Catholic Church in Irish public life in recent years have drawn attention to the wealth the church has accumulated and what relative moral claims the church, the Irish public and the State have over it.

Many adopt an anti-church view on this issue, suggesting that this wealth was generated from donations, State aid and the fundraising of many communities.

These sort of views imply that the religious orders were gifted their wealth by a trusting public or by the State acting on the public’s behalf, and are now betraying that trust by diverting it to their own self-serving ends. For example, the religious order in Dublin that recently sold off five acres of fields formerly available as recreation space in two of their schools, obtaining some €13 million in the process.

The historical record shows that such views are off the mark. The model of church which evolved in Irish Catholicism in the 19th-century and had come to full strength in the mid-20th-century relied heavily on social services provision.

In the 1960s, of the 25,000 priests, brothers and nuns who served the Catholic Church in Ireland, about one in five were priests engaged in parish ministry. These were the carriers of the sacramental mission of the church and, as such, could be counted as more or less wholly religious in the roles they performed.

Most of the others, a large majority of the total, were social service workers – and of these, some two out of three were sisters in religious congregations.

By far the largest numbers were in education, followed a good distance behind by those in hospitals and the “care” services (such as orphanages, industrial schools and Magdalene laundries) that have attracted opprobrium in recent years.

The means by which these workers generated wealth for their orders are easy to see: they worked for it. The services they gave earned income, whether from fees paid by users, fundraising by the faithful, donations from well-wishers or payments from the State.

But they provided those services for “wages”, in the form of little more than board and keep, that would have had any trade unionist shouting “exploitation”.

The cost of their board and keep could be low because the workers involved denied themselves the normal entitlement to families and homes of their own. They endured a celibate, congregated style of living, at a decent but modest material standard.

They thereby freed up a share of the income they earned to be ploughed back into expanding their schools, hospitals and other services.

This system was a reinforcing positive circle of rising income and expanding services, powered by the thousands of women and men who were willing to commit to a lifetime of hard work and self-exploitation to make it possible.

Public funding eventually came to play a role, but mainly in recent decades as the State expanded and the workforce in the congregations shrank.

State subvention to private entities has long been a cornerstone of public policy in Ireland, ranging from the support for land-purchase by farmers in the Land Acts of the early 1900s through to the even more lavish grants and tax-breaks for multinationals today.

Anything the religious congregations got from the State is dwarfed in comparison, particularly in light of how they turned around and gave back value for what they got through cut-price services to the public.

Opposition to the congregations’ role in these services today is often motivated by hostility to their religious character. The members of the congregations did what they did because they believed that by teaching English or algebra in a classroom, or emptying bed-pans in a hospital ward, they were bringing God’s love into people’s lives.

Today, a secular republic is likely to regard God as a foreign power and his agents as interlopers who are as unwelcome in the public sphere as Russian hackers in an American election.

The record of the church in Irish social services was distorted in the past by uncritical hagiographers who buried any mention of the church’s real flaws. Today, we should avoid swinging to the opposite extreme and allowing the nuances of the historical truth to be buried in populist invective.

The thousands of church labourers who built up the properties of the religious orders were as worthy of their hire as the rest of us.

Like any property owner, they have obligations to meet any State charges that might be levied on their wealth but also have the same right to dispose of the fruits of their labours, as any of us have.

Tony Fahey is Professor Emeritus at the School of Social Policy, Social Work and Social Justice at UCD