Vaccine denial will not be solved by punishing parents

Unless take-up improves, Ireland is likely to see epidemics of vaccine-preventable illness 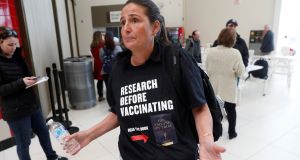 A woman opposed to childhood vaccinations takes part in a demonstration after officials in Rockland County, a New York City suburb, banned children not vaccinated against measles from public spaces. Photograph: Reuters

Understanding the mindset of those opposed to vaccinating their children is crucial to successful health messaging. Public trust in science, medicine and policymakers lies at heart of the low uptake of vaccines in Ireland and worldwide.

Telling parents to “cop on” is not likely to build trust, let alone change hearts and minds. We need a different tack. Recourse to science behind vaccination programme is of limited value and will do little to persuade those who are least trusting of science and the “educated elites” they believe are peddling the vaccination message.

Towards the end of last year, a Twitter post by a mother who chose not to vaccinate her children caused a major reaction online. Her two-month-old child, was seriously ill having contracted whooping cough from her older unvaccinated child. Newborn babies, as well as children who cannot be vaccinated because of treatments that might suppress their immune system, are very vulnerable to contracting and being very adversely affected by these preventable illnesses.

Parents who don’t vaccinate their children believe they are doing the right thing. They do not see themselves as irresponsible or truculent

So when her small baby was hospitalised, this mother stated online that she was shamed for “standing her ground on her beliefs”. The online reaction was fast and furious.

As tempting as it maybe to denounce parents who won’t vaccinate their children because of their beliefs, it is worth reminding ourselves that many of us do not understand the finer elements of the science behind vaccinations. Most of us don’t have the time or the skills to read and digest the research ourselves to make informed choices about every aspect of our own and our children’s healthcare.

In fact, we trust the science and we choose to believe parties like the World Health Organisation (WHO), medics and scientists. So parents that immunise, and those that don’t, both act largely on the basis of their beliefs.

And so we can see that the key difference between the two groups of parents is about their trust in health messaging. This year for the first time, the WHO listed vaccine hesitancy as a potential threat to health. And vaccine hesitancy is profoundly about trust. And this trust has been damaged by many medical and scientific scandals. And the greatest damage done to the vaccination programmes internationally was by medics and scientists: Andrew Wakefield and his collaborators. Using fabricated and falsified data, they purported to find a link between the MMR vaccine and autism. Wakefield’s linking of the MMR and autism has been described as the most damaging medical hoax of the last 100 years.

The damage has been twofold. Prior to the publication of Wakefield’s papers, mumps was believed to be on the brink of eradication and measles and rubella outbreaks were increasingly rare. Last year in Europe, 82,000 people contracted measles and there were 72 deaths, mostly children. In Ireland, measles are on the rise. There were 77 reported cases, including 73 confirmed cases, up from 25 cases in 2017.

Our vaccination uptake rates generally fall short of the 95 per cent target figure to minimise the chances of an outbreak, and there are localised areas in Ireland where vaccination uptake is as low as 77 per cent. Unless this figure is substantially improved Ireland is likely to see epidemics of vaccine-preventable illness. It is no wonder Unicef has warned measles is a growing threat to children.

Wakefield and his colleagues also undermined public trust in science and the scientific process generally, as well as the science behind the MMR vaccine programme specifically. His work was published in very esteemed and creditable scientific outlets such as the Lancet. He had many co-authors named on papers, editors and reviewers who reviewed and accepted his finding before it entered the public domain. For sure the debacle has caused many changes in scientific publication processes, however it highlights for the public that science and scientists, medicine and medics are, like all things, flawed.

Vaccine hesitancy, rather than being a medical issue, is now clearly a social and political one. Wednesday saw the latest consequence of the low uptake of vaccinations. One county in New York has now banned unvaccinated children from public places, including schools, as a consequence of a measles outbreak. In the face of rising incidence in Italy, earlier this month children under the age of six were banned from attending kindergarten if they were not immunised for a range of diseases. Parents of children over six, who cannot be banned, face fines if their children are not vaccinated. A similar measure has been introduced in Australia.

These types of measures are likely to have limited impact on uptake. In fact, they may make matters worse in the long term. Conspiracy beliefs, such as the belief that the harm associated with vaccines is being suppressed, tend to be held by those who perceive the world as very uncertain. Scientific information about vaccine side effects, as well as evidence that science and medicine are not always trustworthy, adds to these feelings of uncertainty and social complexity.

A recently published review of research points also to the political nature of conspiracy beliefs. Conspiracy believers often have heightened feelings of powerlessness and are disaffected with the political system. And all of these feelings are likely to be amplified by measures such as banning their children from schools and public parks. Research finds that those who believe in conspiracies feel more in control and less threatened in their increasingly complex and uncertain world when they reject official narratives.

There are other available approaches. Health messaging has to speak to many constituencies. Some will want to know and understand the science and will be persuaded by it. There is another group who even with limited understanding of the science, will vaccinate because they are convinced they can trust in the science, the medics and the policymakers. For this group, it is important that scientists and medics respect that trust. And for those without faith in the system, it seems uptake of vaccines can be increased.

Even among the very hesitant if the cost of vaccine denial is understood in human terms, uptake has been shown to be increased. Parents, vaxxers and anti-vaxxers alike, want the best for their children. Making clear that vaccine denial has a cost can move many who are hesitant. Laura Brennan epitomised the value of this approach. By becoming an advocate for the HPV vaccine, thereby highlighting the terrible personal cost of not being vaccinated, she single-handedly altered uptake of the vaccine. We need a similarly enlightened approach to all our vaccine programmes.