‘Progressive Ireland’ is a fantasy cultivated by elites 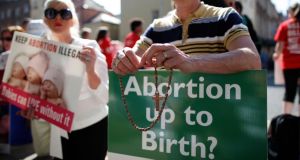 ‘Many Irish people live, work and socialise alongside family, friends and colleagues who have a fundamentally different moral and social perspective to their own.’ Photograph: Peter Muhly/AFP/Getty Images

Britain’s protracted effort to extricate itself from the European Union is bound to reinforce the image, nurtured by Irish political and media elites, of a mature, enlightened and progressive Ireland immune to the charms of populism. Sure nothing like Brexit, or the yellow vest movement, or Trump, could ever happen here, could it?

The view that Ireland is suddenly home to an unshakeable progressive consensus became popular among political and media elites in the wake of last year’s notoriously divisive abortion referendum. Taoiseach Leo Varadkar, for example, asserted in his victory speech that a “quiet revolution” had taken place, culminating in a “resounding” decision by the Irish people to end the constitutional ban on abortion. He even went so far as to venture: “We are not a divided country.”

If we are to believe Varadkar’s version of events, then Ireland is a solid fortress of progressive values and therefore offers little fertile ground for Brexit-style populism to take root. For populist movements cannot succeed without tapping into serious fractures in the social fabric, be they rural versus urban, nationalist versus cosmopolitan, recent immigrant versus citizen, or high-earning elites versus ordinary citizens.

Many Irish people live, work and socialise alongside family, friends and colleagues who have a fundamentally different moral and social perspective to their own. People working in the same hospitals, businesses, universities, and schools may find themselves holding radically different opinions on the moral permissibility of abortion, the legitimacy of the institution of same-sex marriage, the power of the State to determine the curriculum of public schools, the rights of transgender persons and the place of faith in a modern society.

Whether or not these differences are aired publicly, pretending that “we” all agree, that the new Ireland is a haven of progressivism and the old Ireland is just a a relic of the past, “water under the bridge,” is a piece of historical revisionism that only serves to paper over the deep moral fault lines that now define our social landscape.

For now, dissent from the progressive narrative seems to be sufficiently muted that politicians and commentators can afford to ignore it. But muted or not, it is real, as we saw when Peter Casey, best known for his disparaging remarks about Travellers, far exceeded most pundits’ expectations in last year’s presidential election.

Though anti-Traveller sentiment undoubtedly played some role in Casey’s success, anti-establishment sentiment may well have played a more decisive role in catapulting him from a meagre 2 per cent to a more than respectable 23 per cent of first-preference votes, and more than 30 per cent in some rural constituencies.

Those who currently feel alienated from the self-congratulatory narrative of progressive politicians, those who who feel invisible when politicians and journalists casually refer to a new progressive “consensus,” are not going away anytime soon. Given the right political conditions, this reservoir of silent and forgotten voters may well spring into action. Where there are fundamental moral and cultural faultlines, as there surely are in this country, it is only a matter of time before they are put to political use.

Admittedly, as long as our economy remains strong, the fractures in Irish society may pose little threat to the progressive, pro-EU political establishment currently at the helm. But if Ireland suffers a major economic shock, such as a global recession or monetary crisis necessitating a return to “austerity,” there is no reason to believe that anti-establishment sentiment could not be leveraged to build a political movement that permanently realigns the driving forces of Irish politics.

This is basically what the Brexiteers did in the UK, what Trump did in the United States and what the Five Star Movement did in Italy. We should never forget how “unthinkable” those outcomes were to political commentators, and how few experts saw them coming.

In trying times, an unlikely coalition might form between those who feel excluded from “official” progressive Ireland, those who feel rural concerns are sidelined by Dublin elites, those who feel a vague disquiet at the consolidation of materialistic and individualistic attitudes in many sectors of Irish society, and those who are feeling the economic pinch and have lost their faith in the capacity of conventional governments to put the economy back on track.

All it would take for such a coalition to be converted into political capital would be an intelligent and charismatic leader, and a few savvy political strategists, who know how to tap into the anger, frustration and resentment of disgruntled and alienated voters. And voilà, we would have the makings of a potent, homegrown version of populism.

It would be an extraordinarily naive piece of Irish exceptionalism to think that nothing like that could ever happen here.