Time to end the stigma around periods 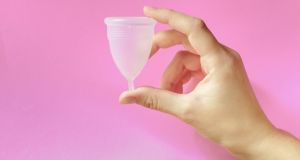 The Republic doesn’t charge VAT on pads or tampons, but more environmentally-friendly products, such as menstrual cups, are still taxed at the highest rate of 23 per cent. Photograph: iStock/Getty

Shark week. That time of the month. On the rag. Whatever name you put on them, periods are having a moment right now. Last week, the Seanad passed a motion on “period poverty” proposed by the Oireachtas Women’s Caucus, having already been passed by the Dáil on March 13th. The motion will have a significant impact on improving the lives of women in Ireland and across the world.

The motion calls on the Government to provide free, adequate, safe and suitable sanitary products in all public buildings, and to arrange more comprehensive menstrual education in schools. It also calls for the Government to prioritise the issue of menstrual equity for gender equality as central to its overseas development programme.

'Womanly matters' such as these should be discussed only in hushed whispers, or so some seem to think

As a young woman, I can’t stress enough the importance of this motion. Recent research by Plan International Ireland’s youth advisory panel, of which I am a member, found that a staggering 55 per cent of girls in Ireland felt embarrassed discussing their period. More than half felt that their school provided inadequate education around periods. Shockingly, 43 per cent didn’t know what to do when they started their period for the very first time, and 61 per cent had missed school as a direct result of their period. It’s undeniable that these statistics are distressing, but I cannot say that I am surprised.

My period and I have a turbulent relationship. We first met a month after my 11th birthday, and we (thankfully, I must admit) have yet to part ways. I count myself lucky to have an amazing mother, who was sure to educate me in advance. And so it was smooth sailing for me on the period front until I started to settle into a regular cycle. That’s when the cramps started. The paralysing, oh-my-God-I-can-hardly-move-or-breathe cramps.

It soon got to a point where every month, without fail, I would black out with pain. I was swiftly referred to a specialist at the age of 12, and I remained under the same doctor until I was discharged a year ago. Two EEGs and an MRI later, they still had no clue what was going on with me, no matter how much my mother and I insisted the cause was hormonal. “Womanly matters” such as these should be discussed only in hushed whispers, or so some seem to think. This thinking seems to permeate every inch of our society, and if we want to eliminate the stigma that comes with periods we need to speak up about our experiences.

The taboo surrounding what is an absolutely normal bodily function is clear to see among young people throughout Ireland today. We’ve all seen it: the tampon sneakily tucked away in a school jumper sleeve on a dash to the toilet, the whisper to a friend “Can I borrow a... pad?”, the last word trailing off into an almost silent murmur. It needs to stop, and the only way it can is through open and honest communication. Education kills stigma.

Just because a girl menstruates does not mean she is ready for marriage, as some parents think

The responsibility lies with the Government. It has the power to make periods more comfortable, sanitary and normalised for us all. A huge part of this is addressing the issue of period poverty: whether you like it or not, bleeding is expensive. Most menstruators have 13 periods a year, with the estimated annual cost of sanitary products and painkillers adding up to about €208. One in two girls struggle to afford these basic healthcare products. We are often forced to resort to unhygienic methods such as socks or toilet roll to manage periods. This is affecting someone you know.

For girls in developing countries the consequences can be vast. Stigma, taboo and affordability around periods can deny girls their education. Just because a girl menstruates does not mean she is ready for marriage, as some parents think. It does not mean she should be banished to a hut while on her period, such as the harmful practice of ‘chhaupadi’ in western Nepal.

The period poverty motion will be monumental in eradicating period poverty. In fact, changes are already being made. In September 2018, Dublin City Council announced it would provide free sanitary products in its public buildings. The Republic doesn’t charge VAT on pads or tampons. But there is still a way to go. More environmentally-friendly products, such as menstrual cups, are still taxed at the highest rate of 23 per cent. In today’s changing climate, this a cause for concern, with menstrual products being the fifth most common item to be found washed up on beaches.

But change is not impossible. Through de-stigmatisation and opening up of the conversation, we have the power to make real and lasting change to the lives of women, change that will benefit society as a whole. The ball is rolling, we can’t let it lose momentum. The answer is simple: we need to talk. Period.