Ursula Halligan: Referendum led me to tell truth about myself

‘For me, there was no first kiss; no wedding. And until a short time ago no hope of these’ 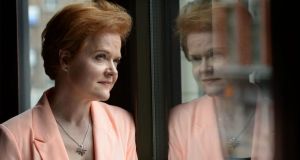 ‘As a person of faith and a Catholic, I believe a Yes vote is the most Christian thing to do. I believe the glory of God is the human being fully alive and that this includes people who are gay.’ Photograph: Dara Mac Dónaill / The Irish Times

“Our lives begin to end the day we become silent about things that matter” – Martin Luther King.

I was a good Catholic girl, growing up in 1970s Ireland where homosexuality was an evil perversion. It was never openly talked about but I knew it was the worst thing on the face of the earth.

So when I fell in love with a girl in my class in school, I was terrified. Rummaging around in the attic a few weeks ago, an old diary brought me right back to December 20th, 1977.

“These past few months must have been the darkest and gloomiest I have ever experienced in my entire life,” my 17-year-old self wrote.

“There have been times when I have even thought about death, of escaping from this world, of sleeping untouched by no-one forever. I have been so depressed, so sad and so confused. There seems to be no one I can turn to, not even God. I’ve poured out my emotions, my innermost thoughts to him and get no relief or so-called spiritual grace. At times I feel I am talking to nothing, that no God exists. I’ve never felt like this before, so empty, so meaningless, so utterly, utterly miserable.”

Because of my upbringing, I was revolted at the thought that I was in love with a member of my own sex. This contradiction within me nearly drove me crazy. These two strands of thought jostled within me pulling me in opposite directions.

I played the dating game. I feigned interest in men. I invented boyfriends. I listened silently to snide remarks about homosexuals. Tried to smile at mimicry of stereotypical gay behaviour.

In the 1970s, homophobia was rampant and uninhibited. Political correctness had yet to arrive. Homosexuals were faggots, queers, poofs, freaks, deviants, unclean, unnatural, mentally ill, second class and defective humans. They were society’s defects. Biological errors. They were other people. I couldn’t possibly be one of them.

Over the years I watched each of my siblings date, party, get engaged, get married and take for granted all the joys and privileges of their State-acknowledged relationship.

My coping strategy was to pour myself into my studies and later into my work. I didn’t socialise much because I had this horrible secret that must never come out. It was a strategy that worked until I’d fall in love again with a woman and the whole emotional rollercoaster of bliss, pain, withdrawal and denial resumed. It was a pattern that would repeat itself over the years.

And never once did I openly express my feelings. I suppressed everything and buried myself in books or work. I was careful how I talked and behaved. Nothing was allowed slip. I never knew what it was like to live spontaneously, to go with the flow, to trust my instincts . . . I certainly couldn’t trust my instincts.

Emotionally, I have been in a prison since the age of 17; a prison where I lived a half-life, repressing an essential part of my humanity, the expression of my deepest self; my instinct to love.

It’s a part that heterosexual people take for granted, like breathing air. The world is custom-tailored for them. At every turn society assumes and confirms heterosexuality as the norm. This culminates in marriage when the happy couple is showered with an outpouring of overwhelming social approval.

For me, there was no first kiss; no engagement party; no wedding. And up until a short time ago no hope of any of these things. Now, at the age of 54, in a (hopefully) different Ireland, I wish I had broken out of my prison cell a long time ago. I feel a sense of loss and sadness for precious time spent wasted in fear and isolation.

Homophobia was so deeply embedded in my soul, I resisted facing the truth about myself, preferring to live in the safety of my prison. In the privacy of my head, I had become a roaring, self-loathing homophobe, resigned to going to my grave with my shameful secret. And I might well have done that if the referendum hadn’t come along.

Now, I can’t quite believe the pace of change that’s sweeping across the globe in support of gay marriage. I never thought I’d see the day that a Government Minister would come out as gay and encounter almost nothing but praise for his bravery. But that day did come, and the work done down the decades by people like David Norris, Katharine Zappone, Ann-Louise Gilligan and Colm O’Gorman made me realise that possibilities existed that I’d never believed would ever exist.

Then I realised that I could leave the prison completely or stay in the social equivalent of an open prison. The second option would mean telling a handful of people but essentially go on as before, silently colluding with the prejudices that still find expression in casual social moments.

It’s the easier of the two options, particularly for those close to me. Because those who love you can cope with you coming out, but they’re wary of you “making an issue” of it.

That means TV3 taking me off referendum coverage. The rules say they must, and when I told them my situation, they reorganised their coverage in half a day.

Twenty years ago or 30 years ago, it would have taken more courage than I had to tell the truth. Today, it’s still difficult but it can be done with hope – hope that most people in modern Ireland embrace diversity and would understand that I’m trying to be helpful to other gay people leading small, frightened, incomplete lives. If my story helps even one 17-year-old school girl, struggling with her sexuality, it will have been worth it.

As a person of faith and a Catholic, I believe a Yes vote is the most Christian thing to do. I believe the glory of God is the human being fully alive and that this includes people who are gay.

If Ireland votes Yes, it will be about much more than marriage. It will end institutional homophobia. It will say to gay people that they belong, that it’s safe to surface and live fully human, loving lives. If it’s true that 10 per cent of any population are gay, then there could be 400,000 gay people out there; many of them still living in emotional prisons. Any of them could be your son, daughter, brother, sister, mother, father or best friend. Set them free. Allow them live full lives.