Una Mullally: Why we need to talk about sexual consent 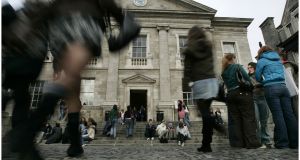 Next September, some Trinity College Dublin students will be expected to attend sexual consent workshops. Freshers staying at Trinity Hall accommodation will take part in these workshops. This student-led initiative will see Trinity explore the possibility of consent modules for the wider student body.

Trinity, like most of society, has an issue with sexual consent. Just under a third of female respondents to a survey said they had experienced unwanted physical contact while at Trinity. A quarter of female students had been sexually assaulted, or had a “non-consensual sexual experience”. Some 42 per cent said they had experienced verbal harassment. Yet less than a third of women and men surveyed had heard of consent campaigns. What is unusual is that Trinity decided to do something about that. It is setting an example other student bodies, it is to be hoped, will follow.

This initiative will, inevitably, be viewed as “controversial”. What is even more fashionable than encouraging open conversations about sex is bundling anything vaguely related to an urge for openness into a “PC gone mad” category, a very conservative reaction. But not educating young people around sex and consent has not exactly served us well. What are we afraid of?

Denying the issue often goes along the lines of: “I’m not a rapist, so why should I listen to this?” That comes from a place of privilege, selfishness, immaturity and narrow-mindedness. We don’t exist in society in our own little individual bubbles. We are part of a bigger picture.

That’s not how society works. One of the inconveniences of a society in which we endeavour to live together harmoniously is that we have to help each other along. Part of that involves collective responsibility. Actions are often born out of a culture. Context informs behaviour, so if you can change the context you can change the behaviour. If everyone works to change that together, as opposed to relying on people to adjust their actions without any information as to why they should, you’re far more likely to create a shift in behaviour. Taking responsibility is very different to accepting blame, yet many get confused by the difference.

Meagher, whose wife, Jill, was raped and murdered in Melbourne in September 2012, said men refusing to take more responsibility, and therefore “othering” the experience of sexual assault by saying most men don’t engage in such behaviour, was completely unhelpful.

“Of course most men wouldn’t do this, but so what?” Meagher said. “We’re not going to give you a cookie for doing the minimum you can to be a decent human being.”

As well as being confronted by far more violent sexual imagery and hardcore pornography, younger generations are also party to conversations about consent in a way my generation never was. Some people are allergic to anything perceived as too “right on”. The new vocabulary that has sprung up around contemporary culture is something with which many are grappling slowly. But the language itself gets spread and popularised online far more quickly. Conversations about privilege, rape culture, gender fluidity, sexuality, intersectionality, race and third-wave feminism require new terminology that can often be intimidating.

We worry about saying the wrong thing or offending. Condemnation often follows a misstep, illustrating an impatience among those who previously had only one set of language to deal with. For hundreds of years the only language in public discourse available to western society was that decided by privileged white men. As others claim language and need new language to describe an experience that might be non-male, non-white, non-heterosexual, non-privileged, conversations evolve. People shouldn’t have to apologise for finding their space in society and bringing to the fore issues they consider important. If that bugs you, you need to ask yourself why.

Many people have murky sexual experiences. If you give people a solid framework of education around consent and sex, then things become a lot less blurry. This isn’t about controlling people, it’s about freeing them. Why wouldn’t we want to talk about this? What have we got to lose? Young people and grown-ups not talking about sex serves no one well, especially in a country as repressed as Ireland.