Una Mullally: Why are there only five free women of Dublin? 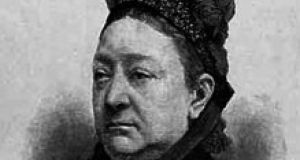 Suffragist Margaret Sandhurst was the first woman to be given the Freedom of the City, in 1889, three years before her death.

In 140 years, 80 people have been awarded the Freedom of the City of Dublin. Nominated by the Lord Mayor, and approved by Dublin City Council, the award has some archaic benefits but is largely seen as one for people who have made a big contribution to the city and to Ireland. Most of all, it is seen as a huge honour, an award that carries gravitas and weight.

Since 1876, the honour has been bestowed on some of our most recognisable figures from Dublin, Ireland, Britain, and far beyond.

The roll call of honourees is hefty and impressive; Butt, Gladstone, Parnell and Dillon in the early years. There are artistic luminaries such as Hugh Lane, Chester Beatty, and George Bernard Shaw. Names that feature heavily in our national conscience such as John Redmond, Eamon de Valera, and Pope John Paul II are there. There are international household names, Bill Clinton and Nelson Mandela. There’s all of U2 and their former manager, there’s Gorbachev and Geldof, le Brocquy and BO’D. Sure aren’t we great altogether for honouring these folks, and mustn’t it be such an honour for them.

The Freedom of the City of Dublin is also one of the most sexist lists going in Ireland, and that sure is saying something. In recent years, male recipients have in fact been doubled up on, not lessened. Last year, Brother Kevin Crowley and John Giles were awarded the Freedom of the City. In 2014, Father Peter McVerry and Brian O’Driscoll were the recipients.

With all due respect to these great men, it’s about time we redressed the balance of the Freedom of the City of our capital. In 140 years, just five women have received the honour. Five. Margaret Sandhurst was the first in 1889, three years before the British suffragist’s death. It would be nearly 100 years until another woman received the honour, Maureen Potter in 1984. The then Crown Princess Michiko of Japan received the honour a year later, a joint presentation along with her husband Akihito.

In 1993, Mother Teresa was honoured, and in 1999, the Freedom of the City went to Aung San Suu Kyi. So, remarkably, the city of Dublin has awarded the honour to just one Irish woman, Maureen Potter, 32 years ago. One. Surely, more than just one Irish woman since 1876 has been worthy?

Sitting in a pub with some friends who are no strangers to advocating for gender equality on International Women’s Day this week, we started talking about the Freedom of the City. We were trying to work out how long it would take for the honour to achieve gender parity if from 2017, the Lord Mayor’s office and Dublin City Council only honoured women every year. We’d be waiting until 2086.

Then one male friend said, “why don’t they just give it to all of them now.” Well, why don’t they? What a great idea. There is nothing stopping the city of Dublin from awarding the Freedom of the City to multiple people in any given year. They did it for U2, who happily grazed sheep in St Stephen’s Green to show off their new privileges.

In 2016, 70 living women should be given the Freedom of the City of Dublin. Let’s not wait decades and decades for the balance to slowly tip towards an equilibrium. We can do it now, and we should.

Frequently there are practical obstacles to achieving gender equality in various areas, leading to stalling or incremental steps born from reluctance. Quotas often don’t start at 50/50 straight away, and targets of achieving equality are set for three, five, and 10 years and beyond. The idea of doing things “right now” when it comes to addressing gender inequality is sometimes seen as too dramatic or just impractical.

But there is nothing stopping the city of Dublin from awarding 70 women the Freedom of the City to achieve gender parity for that illustrious roll of honourees by the end of this year. What a fantastic gesture it would be in our centenary year to redress the balance, especially with the roll of women in 1916 so much to the fore at the moment.

There are countless women who should be on that list who are no longer with us. The Freedom of the City, as far as I’m aware, is not awarded posthumously. Because of how women have been historically and consistently sidelined, discriminated against, and overlooked in our society, many women who should rightly have been recognised with this honour from the city never got their day out, their illuminated scroll, their ceremony, or their recognition.

It is worth noting that the current Lord Mayor is Cíona Ní Dhálaigh, the first Sinn Féin councillor to become Lord Mayor of Dublin, is of course, a woman. What a fantastic legacy it would be for her to take up this baton and honour women in 2016. We can’t do much about the past, but we can certainly recognise the achievements and contributions of women in the present and for the future.

If you have any suggestions for which women should be honoured amongst the 70 for the Freedom of the City of Dublin, I’d encourage you to take to Twitter using the hashtag #FreeWomen.

There’s nothing stopping us, so let’s just do it.