Una Mullally: The battle against Trump has only started

An estimated 500,000 people took to Washington DC for the Women’s March on Washington. Similar marches took place across the world from Sydney to Chicago. Video: Reuters/CNN 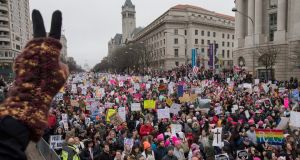 Thousands of people on Pennsylvania Avenue gather in the Women’s March and rally to protest President Donald J Trump the day after he was sworn in as the 45th President of the United State. Photograph: Epa/Michael Reynolds

“Hear them roar”, read a headline in a US newspaper. A real movement is when expectations are exceeded beyond people’s wildest projections. The Women’s Marches around the world last weekend are a moment in history. Millions made themselves heard. The marches were peaceful and beautiful, and they will birth a generation of activists.

It has been reported that 53 per cent of white women who voted, voted for Donald Trump, but they did not turn up in any great numbers to his inauguration. If you really believe in something, you show up, rain or shine. Women opposed to Trump are clearly now far more motivated to resist his presidency and administration. These marches also cap and continue a remarkable time in history for the women’s movement and for feminism. For several years, we have been talking about this third wave of feminism. The millions of women and men marching around the world are its manifestation, articulation, celebration and continuation. The marches in the US also come at a time of increased protest and civic engagement related to the Black Lives Matter movement.

11 Walk this way: 17 tips for getting the most from your daily lockdown outing

13 Fintan O'Toole: The State has never got its head around the pandemic

18 Eat, move, think: What you need to know about children’s health (teenage girls)

24 Stripe leads $102m funding round in US start-up Fast

25 Mary Lou McDonald: Government must be active in conversation on a united Ireland

27 Fauci reveals what it was really like working for Trump

32 Zero-Covid strategy could ‘save the summer’, People Before Profit says

33 Why should the Leaving Cert have to be ‘brutal but fair’?

34 Blindboy Boatclub: ‘I had the choice of being a psychotherapist or a mad bastard’

38 The chickpea stew that broke the internet in the US is here. Give it a go