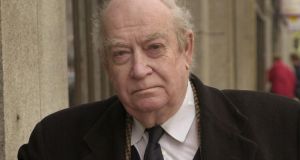 There is a modest Turkish restaurant called The Gramophone on a leafy residential street in the Parisian suburb of Montreuil, with a large photo of its most famous customer on the wall. It is a portrait of the Scottish publisher John Calder, in his trademark pin-striped suit, with that familiar gruff, slightly truculent look on his face, by John Minihan. Minihan gave the portrait to the restaurant staff, who are proud of their distinguished customer, and his association with so many famous writers, including Nobel prize-winners Samuel Beckett, Heinrich Böll and Claude Simon. He has published over 1,500 books in a career spanning 70 years. Wednesday is John Calder’s 90th birthday.

The Gramophone is only a short walk from his apartment, and most nights Calder and his wife Sheila will be found sharing a table with a group of lively younger friends, often long-term Irish residents of Paris who gravitated to him through a shared passion for the work of Samuel Beckett, alongside visiting writers and scholars.

John Calder is best known as the publisher of Samuel Beckett. He also published my husband, Aidan Higgins (1927-2015), his exact contemporary, who was recommended to him by Samuel Beckett. John spent many hours editing the ambitious Irish novelist, and recalls Aidan’s gratitude. Aidan freely acknowledged that without John Calder’s expertise there would have been no Langrishe Go Down, no Balcony of Europe.

This is how I came to meet a man who had been a hero when I was studying in London in the 1970s, for his adventurous list, and his wholehearted support of freedom of speech. Aidan described Calder as “difficult to know, but good at heart”. He does not do small talk, nor business networking, but is brilliant in congenial company, with a contagious passion for books, writers, ideas, poetry, theatre, arts and music.

On a recent visit to Montreuil, I gave John Aidan’s last book, Blind Man’s Bluff, a collection of short pieces, forgetting it contained a frank and gingery portrait of his old friend, criticising his habit of counting his amorous conquests (over 300), and his opera attendances (over 3,000), and mentioning his well-known tightness with royalties. But all was forgiven when John and Sheila read the line: “He was a peerless publisher but not a sharp businessman”. They loved “peerless publisher”. A tribute in the Times Literary Supplement (December 16th, 2016) echoed this sentiment: “John Calder is what might be called a good bad publisher – a type with many flaws and inconsistencies who is nonetheless central to the literary era in which he figures.”

He is of course also a writer, with two volumes of memoirs, two books on Samuel Beckett and three books of his own poetry currently in print. He has worked tirelessly to encourage people to read the work of Samuel Beckett, contradicting the notion that it is difficult. In his 1980s he toured Ireland a dozen times with the Godot Company, presenting Beckett plays and lecturing on Beckett in intimate venues in Waterville, Cork, Galway and Dingle and other places.

In 2011, some 48 years after first meeting her in Edinburgh, John married his friend Sheila Colvin, a warm, humorous woman. She thinks the 48-year delay between meeting and marrying might be a record. Sheila had a distinguished career as an associate director of the Edinburgh Festival, a theatre and TV producer, and director of the Aldeburgh Music Festival. Together they commute between homes in Montreuil and Edinburgh.

John Calder’s 90th birthday celebrations will begin with a cocktail party at a London club, and will inevitably feature a gathering at The Gramophone. But more important is the launch of a new edition of Pursuit: The Uncensored Memoirs of John Calder. First published in 2001, this highly entertaining memoir is published by Alma Books, with an afterword by editor and publisher Alessandro Gallenzi.

Alma Books now owns the imprint Calder Books. John recalls, “I advertised for a successor in 2007 – not for money, I sold the imprint for £1, just to keep it going.” Alessandro saw the ad in the Bookseller, and knew his fate was sealed: “I knew his list, and I knew that I wanted it. We share so many interests: exciting avant garde literature, modern classics, fiction in translation. Eighteen months of my life vanished into smoke with this project, but it has been worth it. I enjoy working with people who have devoted their life to literature, rather than just working for commercial success. John Calder is a great publisher, and that is what matters, not his lack of business skills.”

Alessandro tells the full story in a revealing afterword to Pursuit. The first batch of Calder Books will be published in June, and new books will be commissioned in the ethos and spirit of the original imprint. What better birthday present could a peerless publisher want? Happy birthday, John Calder, from your many friends in Ireland.

Alannah Hopkin’s story collection, The Dogs of Inishere, will be published by Dalkey Archive Press in April.