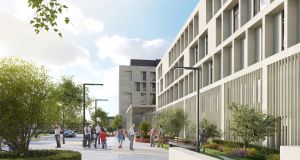 A computer-generated image of the proposed new National Maternity Hospital.

In the back room of Foxy John’s pub in Dingle on Saturday, Dr Maeve O’Rourke, who must possess one of the finest, most passionate legal minds in the country, laid out some harsh realities for a society basking in the progressive, feminist afterglow of the referendum to repeal the Eighth Amendment.

O’Rourke is a human rights lawyer, senior researcher and policy officer at the Irish Council for Civil Liberties, and a legal adviser at Justice for Magdalenes Research, and the talk took place at Banter, an event at the Other Voices festival, where she was interviewed by Jim Carroll.

O’Rourke has done incredible work in highlighting the injustices perpetrated against women who were sent to Magdalene laundries, along with insisting that Ireland address its culture of detainment and institutionalisation. She is also an advocate of lawyers using legal argument and expertise outside of court to progress social change.

With passion, vocational drive, clarity and focus, she spoke about how intrinsically the Catholic Church is still embedded in the functions and infrastructure of the State. We hear anecdotal stuff about the conservatism and religiosity embedded at high levels in government departments. We know that ministers come and go, but the Civil Service stays. O’Rourke used the phrase “the permanent government” to illustrate who is really in control in some cases.

It is difficult to unpack why detainment and institutionalisation has been a method of control that the State has continuously fallen back on. This continues today, with the detainment of asylum seekers within the direct-provision system, a regressive, unfair and cruel infrastructure that must be dismantled if we don’t want to find ourselves with more commissions of inquiry about and investigations into what happened in those centres in years to come.

From prisons to mother-and-baby homes, history and the present show it is always the more vulnerable people in our society who end up being locked up disproportionately. At the start of last year, for example, more than half of the children detained in Oberstown had lost one or both parents through “death, imprisonment or no long-term contact”. Fifty-five per cent had mental-health issues. Eighty per cent had problems with alcohol or drugs. Thirty-six per cent had learning disabilities. Sixteen out of 69 children in the detention centre were Travellers, nearly a quarter of the centre’s population.

A total of 151 people died in psychiatric units in Ireland in 2016. Last May, the Court of Appeal found that a provision in the 2001 Mental Health Act pertaining to the long-term detention of up to 100 people in psychiatric institutions was unconstitutional. This followed a case brought by a man in his 30s who was allegedly detained for long periods after recovering from a mental illness because funding for accommodation outside of detention was not provided for him until after he won a High Court case.

This brings us to the National Maternity Hospital (NMH), and the realisation that after protest and progress, there remains a lack of clarity with regard to who is actually going to own it, or have influence and control. A lack of clarity, a lack of transparency and general obfuscation are tactics repeatedly used by religious organisations in this country to shroud their actions. This does not leave them in a position to be trusted, and that is their doing.

If the NMH effectively becomes a subsidiary St Vincent’s Healthcare Group, which the Sisters of Charity are the major shareholders in, no amount of assurances from the religious order that it is “giving up” its hospitals, or removing itself from boards, or that it will not dictate the parameters of healthcare in those hospitals, will be adequate.

If Minister for Health Simon Harris does not address this issue now, he will not be remembered as the politician who so clearheadedly and empathetically stood up for women’s reproductive health during the abortion referendum campaign, but as a Minister who capitulated to an organisation that has no right to take any kind of ownership over or have any influence in a hospital that has been publicly funded, in this case costing more than €300 million. This Saturday, a demonstration called Make Our National Maternity Hospital Public, will take place at the Spire on O’Connell Street at 2pm. The people have to make their voices heard on this issue.

The Sisters of Charity have refused to contribute compensation to women who were in Magdalene laundries, which they ran. In 2009, their property assets were found to be worth more than €1 billion. Women were kidnapped, detained and committed to forced labour. They were abused and beaten. Their identities were dismantled and their sense of self and autonomy was obliterated. They were buried in unmarked graves. They were shoved outside of society, away from family, banished from communities, locked away treated as subhuman for often the most minor infractions or sometimes even none at all.