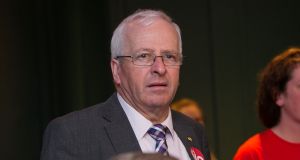 Tipperary voted Yes with 59 per cent of voters favouring repeal of the Eighth Amendment.

Turnout in Tipperary in the referendum was 64 per cent which was higher than the marriage equality vote when 61 per cent of eligible voters cast a ballot.

The final vote reflected tallies throughout the day which suggested almost 6 in 10 valid votes were for the Yes side.

The final result declared at the Presentation Convent sports hall in Thurles on Saturday afternoon with 72,247 voting Yes and 29,516 voting No.

There were 238 spoiled votes.

Four of the five constituency TDs attended the count centre at some point during the day, with independent TD Mattie McGrath the exception as he was in RTÉ providing commentary for the broadcaster.

Earlier, Mr McGrath, a vociferous No campaigner, said he was “a bit surprised” by the strength of the Yes vote.

“We have to see the legislation when it’s published and examine it. I’m certainly not going to obstruct it,” he said.

Fianna Fáil TD Jackie Cahill, also a No voter, said his party leader Micheál Martin’s declaration of support for repeal was a “brave” move and one that has now enhanced his standing with the electorate.

Independent TD Michael Lowry, who voted in the Dáil against holding the referendum said he was “pleased” that a divisive campaign was over.