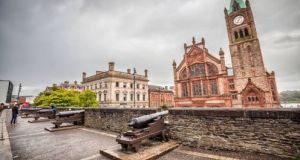 Derry City. One of the things that makes Derry Girls such a triumph is that it takes you by surprise. Photograph: Getty Images

I will never forget watching the first episode of Father Ted in 1995. I spent that night recovering from a face sore from laughing at Ted and Dougal’s escapades in “Fun Land”. Even as the credits rolled the gags kept coming, with escalating announcements about a child lodged in the “Tunnel of Goats”. After watching the first episode of Derry Girls on Channel 4, which ended its first six-episode series last week, I had that same feeling. If you haven’t watched it yet, quit reading this and turn it on.

One of the things that makes Derry Girls such a triumph is that it takes you by surprise. You think it is going to be a classic comedy with a story-of-the-week format, but the most striking aspects of the series were a sentimental love story about an older man, and the extraordinary juxtaposition in the finale of the comic elements of the stories of teenage girls and the tragic elements of the Troubles.

How it achieved those things was by skilfully taking the comedy and twisting it suddenly, snapping reality into focus. That is the sign of an original voice taking a courageous position. Lisa McGee, its creator, is not making television by numbers. At a time when small talk frequently descends into discussions about what shows we’re watching, being taken by surprise by, and falling in love with, a television series that feels fresh amid all the noise is a beautiful thing. The writing in Derry Girls is sublime, the performances perfect, the casting is brilliant.

For streaming services and traditional platforms, word of mouth just doesn’t travel fast enough. The slow burn of series such as Breaking Bad, Catastrophe and Fleabag was more authentic, but with so much money on the line distributors and platforms need things to click with audiences quickly.

The conveyor belt of reboots and remakes – Gilmore Girls, Roseanne, Will & Grace, Murphy Brown – is a sign that some corners of the television industry are short on ideas, and they’re running out of ideas because too many companies are competing for the same audiences.

The pressure to create television shows that become hits is huge, and the beast of binge-watching needs to be fed. With makers and platforms trying to get shows up on their legs quickly, and trying to connect with audiences as fast as possible, they are increasingly going for the cheapest shot, which is the recognition factor. In cinema it’s this pre-sold franchise thinking that has made the summer blockbuster output of Hollywood a laughing stock, with predictable remakes and tedious superhero and comic book films flopping one after the other. Black Panther will be one of the hits of the year, and, yes, it’s a superhero movie, but it’s also original to the point of revolutionary given how white and male the superhero films that clutter cinemas are. Meanwhile, CBS ordered reboot pilots of Magnum P.I. and Cagney & Lacey last year.

Peak TV is a term that has been thrown around for the last few years, but with production at an all-time high, additional problems begin to surface on a practical level such as shortages of appropriately skilled screws, studio space, and oversubscribed props houses. This is all before Apple – which hired two former presidents of Sony Pictures TV – enters the fray. Apple has signed up Kumail Nanjiani and Emily V Godon (The Big Sick) for its new series about immigrants called Little America, as well as a show staring Reese Witherspoon and Jennifer Aniston, another one starring Kristen Wiig, and another based on the novel Are You Sleeping, plus Steven Spielberg’s Amazing Stories, a sci-fi series, and a documentary series by Matthew Weaver.

Yet if Irish audiences can understand and relate to the emotions and storytelling that underscore the complexities of policing in Baltimore, meth-making in Albuquerque, or the intricacies of Danish national government, then people outside of Ireland will wholeheartedly “get” the exchange in Derry Girls between Michelle and her English cousin James as they cram for a history exam. “Well, I can’t tell my rebellions from my risings,” James says, to which Michelle responds: “And whose fault’s that? If your lot had stopped invading us for five f***ing minutes there’d be a lot less to wade through.”

1 Child (4) died of viral infection following nap at Cork creche
2 Miriam Lord: Does anyone care if Leo smoked or snorted?
3 The Turning: This film is a total waste of time. Don’t even read the review
4 A vegetarian and a non-drinker visit Ireland: here’s their verdict
5 Man tested for symptoms linked to coronavirus in Belfast
Real news has value SUBSCRIBE