A plane tale: An Irishman’s Diary on remembering the Brabazon 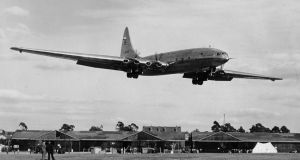 The biggest passenger plane in the world was flying low over Dublin. It was August 25th, 1951, and the Brabazon was on its way back to Bristol after a visit to the Belfast Air Show. And I was looking at it.

Its passage over Dublin that Saturday was noted in the following Monday’s Irishman’s Diary, whose author Quidnunc commented: “Not many people, I think, found the Brabazon beautiful to watch ... with its long, slim body and swept-back wings placed, or so it seems, absurdly far back along the fuselage, it resembles nothing so much as the monstrous and evil insect of a nightmare.”

Quidnunc also opined that, while adults his age were still inclined to look up at every passing aeroplane, Dublin children that day hardly gave a second glance up from their games to view the lumbering behemoth just over their heads.

The Brabazon truly was an awesome thing to behold in our skies, which up to then had seldom seen anything bigger than an Aer Lingus Dakota DC3

There were at least two exceptions to that: I and another boy who lived down the road were gazing at it wide-eyed, along with his father who kindly let me have a go with his newly-purchased binoculars .

The Brabazon truly was an awesome thing to behold in our skies, which up to then had seldom seen anything bigger than an Aer Lingus Dakota DC3.

To us it seemed to be flying perilously close to the rooftops, and moving so slowly that it might lose all momentum and drop out of the sky.

Another news report that week said that the Brabazon project, begun in 1943 (while Britain was still at war) had by 1951 cost some £12 million. It added that work had begun on a second Brabazon at Filton, near Bristol, in the world’s largest aircraft hangar. But the second one never got built and the first one never carried a paying passenger in its short life.

So what went wrong? The simple answer is that no airline wanted to buy it.

An old joke has it that a camel is a horse designed by a committee, and the plane was the result of many deliberations held by the Brabazon Committee, set up by the British Air Ministry and headed by the 1st Baron Brabazon of Tara, Lord John Cuthbert Moore-Brabazon, who was minister of transport and minister of aircraft production during the second World War.

His Lordship, a pioneering aviator in his youth, had been a friend of the Wright Brothers and of Charles Rolls (co-founder of Rolls-Royce) and he had made the first live cargo flight in Britain, bringing a small pig aloft in a basket attached to his Voisin plane.

After such a colourful career he was unfortunate that his name came to be attached to one of the biggest flops in British aviation.

He and his committee members came from an era when only the wealthy could afford to fly, and they designed something that, for all its innovative engineering advances, was totally at odds with the realities of a struggling postwar world. What they came up with was an ocean liner of the skies for the privileged few.

I reflected that this beautiful aircraft had one thing in common with its gigantic predecessor: it too was aimed at the wealthy

It had eight engines and a wingspan of 230 feet, wider even than the future Boeing 747. Its maximum seating capacity was 150 – but it was envisaged that transatlantic flights would carry 80 passengers, who would have the use of lounges, cocktail bars, a cinema and sleeping accommodation.

The Brabazon’s maiden flight was watched by some 10,000 people in September 1949 when it flew for 25 minutes with Capt Bill Pegg, chief test-pilot of the Bristol Aeroplane Company at the controls. But just two two years after its Dublin flypast, the plane which had been lauded in the British press and Pathé newsreels as ” the queen of the skies” was sold as scrap for £10,000.

Twenty-five years later on another August day I stepped aboard a much smaller plane: the Concorde.

Along with other Irish journalists I was headed to Bahrain and back overnight courtesy of the late Bill O’Herlihy who was PRO for British Airways in Ireland.

I reflected that this beautiful aircraft had one thing in common with its gigantic predecessor: it too was aimed at the wealthy – and perhaps for those in a hurry to get richer quicker.

The Concorde did well: 20 were built before one crashed in flames on take-off outside Paris in July 2000, killing all on board.

But meanwhile back in 1976 as we reached twice the speed of sound halfway across Europe, I raised my complimentary glass of champagne to salute this new wonder of the skies – and remembered the day I saw the Brabazon.