Una Mullally: Fianna Fáil has gone from stroke to joke 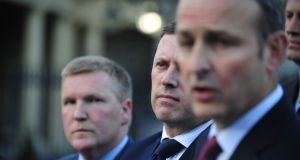 Fianna Fáil’s chaotic beginning in government is what happens when a cryogenically frozen party finds itself defrosted in a new era. It is now worth asking whether Fianna Fáil is fit to govern at all.

The party’s honeymoon period of about 2.5 seconds was downright laughable. This was an Armando Iannucci version of the party, right in the thick of it. No sooner had Micheál Martin become Taoiseach – a journey that doesn’t seem to have any signposts beyond that destination – than the chaos began.

1 How a ship abandoned by its owner brought deadly cargo to Beirut
2 Production at Brady’s Ham plant in Kildare stops after 80 staff test positive for Covid-19
3 Covid-19 nonsense peddled by celebrities needs to be challenged
4 Caroline Flack died by suicide after learning of prosecution, inquest finds
5 Scientists uncover biological signatures of the worst Covid-19 cases
6 Officials refuse to rule out ‘Midlands lockdown’ following Covid-19 surge
7 Well-known figures in Irish soccer arrested over €3m heroin haul
8 Masks Q&A: Who has to wear them in shops and what happens if you don’t?
9 ‘I wandered around Dublin wondering: Is this what they call a capital city?’
10 ‘Coming home to Ireland felt like a gamble. I felt safe in Korea’
11 Scarlet for ya: Paul Mescal does classic Connell in The Rolling Stones’ new video
12 Tributes paid as boy (15) who fell from Powerscourt Waterfall named
13 Simon Coveney: Risk of nuclear catastrophe is unacceptably high
14 Meat plants Q&A: The lingering coronavirus threat
15 Two men face fraud charges over £1.2bn sale of Nama’s NI loans
16 Ireland faces ‘recurring waves’ of Covid-19, Minister warned
17 Dolph Lundgren: Grace Jones would bring as many as five girls back... ‘Exhausting’
18 Murder accused claims partner died during sex act, court told
19 Revealed: the international evidence NPHET relied on to keep pubs closed
20 Ford Kuga: Impressive plug-in hybrid SUV underlines motor giant’s renaissance
21 Suspect arrested as gardaí allege ‘corrupt practices’ at statutory body
22 'There is no way I would go' - Irishman in Malta cancels trip home as two weddings put off
23 Harding Park: The municipal course you can play for $50
24 Coronavirus: Residents in Kildare, Laois and Offaly urged to take extra care after cases spike
25 Fresh investigation into the murder of Michaela McAreavey in Mauritius
26 Irish Olympian’s gilt-edged former Monkstown home for €3.45m
27 What can €120k buy you in Italy, Greece, Cyprus, Lithuania and Louth?
28 Not for the birds: Keep your blueberries for these delicious oat slices
29 Trinity College lawns dug up to make room for wild flowers
30 Taoiseach signals Covid-19 impact on health and housing
31 Coronavirus: Community transmission picking up pace as only eight counties see no increase in cases
32 Family News, a short story by Naoise Dolan
33 John Hume obituary: Nationalist leader who championed ‘agreed Ireland’
34 Bryson DeChambeau trainer insists muscle gain is not down to steroids
35 John Hume: ‘He was our own Martin Luther King’
36 UK offers a model for how pubs could reopen
37 Project Eagle: What was it and why is it in the news?
38 When Covid subsided, Israel reopened its schools. It didn’t go well
39 Microsoft now looking to acquire TikTok’s entire global business
40 ‘I’ve had my butt kicked for the past three years’: Jamie Oliver on fame and failure
Real news has value SUBSCRIBE