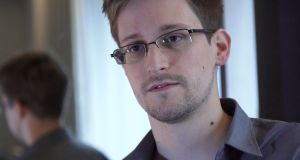 Edward Snowden: Still holed up in Russia, still waiting for a pardon from Barack Obama. (Photo by The Guardian via Getty Images)

It must have been difficult for Oliver Stone to attempt to come up with a happy ending for his latest film Snowden, following the life and times of Edward Snowden played by Joseph Gordon-Levitt. The end, like Snowden’s current situation, is ambiguous. Stone still makes films that feel stuck in the late eighties or early nineties , but with Snowden still holed up in Russia, still waiting for a pardon from Barack Obama, it’s almost a odd subject for Stone to have a go at.

With Citizenfour, Laura Poitras made an excellent access-all-areas documentary, so Snowden definitely doesn’t reach those heights as a film. It is however interesting that this mild-mannered hero or antihero, however you see him, is back on the big screen so soon.

Films like Snowden try to give a subject and a person historical context. Why was Snowden important? Why was what he did important? In exposing the wide scale monitoring of private citizen’s communications, Snowden blew the lid on the Big Brother we already knew in some ways was staring down at us. This historical context is difficult to grasp when it’s still live, and also when many people are so keen to ignore it.

“Use @Yahoo?” Snowden tweeted this week, “They secretly scanned everything you ever wrote, far beyond what law requires. Close your account today.” The report by Reuters that Yahoo essentially operated a wiretap service for US intelligence agencies, scanning hundreds of millions of Yahoo emails for the NSA and the FBI is another massive story, but one that will be largely shrugged off by a public who decided that their privacy was worth the exchange for some “free” internet toys some time ago.

There’s a moment in the film when a green Snowden is introduced to the far-reaching search and intrusion capabilities of the NSA, with conversations on internet message chat services, email, phone calls and so on pulled up with the ease of entering key words into a search bar. The scene feels somewhat overly simplified but trawling for information in such a vast sea does require ease of use, one would imagine. In fact, in this week’s Reuters Yahoo story, Joseph Menn wrote, “It is not known what information intelligence officials were looking for, only that they wanted Yahoo to search for a set of characters. This could mean a phrase in an email or an attachment.”

What the film fails to do is drive home the point about why invading our privacy, monitoring our communication and scanning our online and phone activity is an issue. Snowden’s girlfriend is used as a device for the “but I’ve got nothing to hide” argument. And this is an argument that carries a lot of weight in a world where fear and anxiety of those who do have something to hide looms large. We are told, and we know, that there are so many threats these days, primarily terrorist cells and lone wolves concocting and executing horrific attacks that seem increasingly hard to prevent. But the dragnet of information gathering of citizens existed before ISIS.

If we can’t figure out why our privacy matters - especially since we’ve given so much of it up voluntarily - then the impact of what Snowden did will be lost. But why can’t we conclude that government agencies and nation states spying on their people is problematic?

It is about not wanting to face a truth, to want to turn away, to wilfully seek not to understand or learn about something that is, after all, complicated, to put fingers in our ears, to not want to know that what we do in private online and on phones can be accessed, to think that the baddies are being spied on not us normal folk.

Snowden showed us that we were being watched, listened to, spied on. What we do with that bombshell will be the measure of the impact he had. For now long after his revelations, it still feels like he’s shouting into the wind.

1 Majority of Irish Covid-19 cases come from variant that originated in Spain – study
2 Cork shootings: Father and sons to be buried in two separate funerals
3 Postmortem results on mother and two children found dead in Dublin due on Friday
4 The real Contagion virus is out there and it’s causing virologists to worry
5 Bickering architect and builder take the shine off a feel-good story
Real news has value SUBSCRIBE