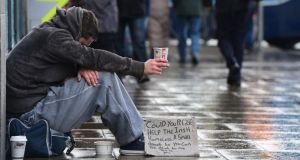 “The recovery is not all-encompassing. We are witnessing a poverty gap grow into a chasm.” Photograph: Alan Betson

For a while now, Dublin has had a spring in its step that has been impossible to ignore. Neighbourhoods that were dead even throughout the boom, such as Smithfield, are buzzing. The ugly apartment, office and retail architecture that typified the Celtic Tiger, a boom bankrupt of beauty, has settled into the streets it knocked down and reclaimed.

Everywhere a kind of prosperity based on 30- and 40-somethings and tourists is evident; the boutique hotels and enticing bars, cafes and restaurants. Many of these have been established by hard-working people creating employment and benefiting from post-recession consumerism. A friend of mine thinks one of the better indicators of young people’s disposable incomes is the music festival market, because not only is buying a ticket a large investment in advance, but it also requires the consumer to also have a large amount of cash once they attend. Electric Picnic sold out in five minutes last week. Superficially, the fabric of Dublin is alive and thriving. The places that can’t rake in cash with the highest profit margins – nightclubs and queer spaces – are closing, and newspapers are full of reviews of the hot new spots enjoyed by those who can afford to frequent them.

I listen to my friends talk about trying to buy houses in Dublin with asking prices that almost instantly fizz skyward, 60, 70, 80 grand over what they were put on the market for. “Construction boom could overheat economy, says ESRI,” a headline read last Thursday. We’ve heard that one before. There is something of an inevitability to all of this, and we see it in desirable cities all over the world. Dublin was never really one for gentrification, but that’s what has happened, with those who contribute to the creative aspects of the city increasingly being pushed out of it, and a generation devoid of the securities their parents had mistaking an upswing for a rising tide lifting all boats.

Sitting outside a bar on Exchequer Street with a friend last Saturday evening, the buzz in town was overwhelming. It was a sunny day, Dublin was in its finery and everywhere were smiles and clinking pint glasses, friends spilling out of Grogans and shoppers marching down Henry Street. “It’s almost like it’s two cities,” my pal said, as we dealt with that other city: the inevitable stream of people begging – a young lad who said he had become homeless two weeks earlier and doesn’t drink so could we spare him a euro; another man with a sleeping bag wrapped around his shoulders; another man drunk from cans he was gulping from a shopping bag; a homeless woman heavily pregnant asking for help. I’d already given my change to the first lad and wished I had saved it for her.

During the boom there was a feeling that everyone was doing well. We know that was ultimately rubbish

This is the layer of augmented reality that sits on top of Dublin now. You can see it if you want to. The inequality is stark. During the boom there was a feeling that everyone was doing well. We know that was ultimately rubbish, of course, because the prosperity was completely artificial. But this “recovery” being talked about is equally ropey, not to mention exclusive and elitist. The recovery is not all-encompassing. We are witnessing a poverty gap grow into a chasm.

We are all on the edge. Indicators of poverty have become normalised for many young people

Inequality is not inevitable. It is the consequence of designed economic policies and the pursuit of profit for those who need it the least. With the gung-ho centre-right economic conservatism of Fine Gael in power, a hodgepodge of ideologies that shirks social responsibility at every juncture, sells off all it can find, and brays about recovery yet is conspicuously silent on poverty, it is tempting to enjoy the fruits of such a “recovery”. Yet even among the seemingly “sorted”, the traits of poverty and inequality are there.

We are all on the edge. Indicators of poverty have become normalised for many young people: a lack of disposable income, being forced to live in the parental home due to poverty, living in unacceptable conditions in the private rental market, unable to afford rent, skipping meals, subletting their own rental property for income, spending periods of time couch-surfing as an alternative to paying rent, being unable to afford returning to education, existing on the income of part-time work or short-term contracts, having no savings, being in debt, being unable to afford new clothes, avoiding leisure activities that cost money. This is of course not to mention the chaotic and multifaceted housing and homelessness crisis that continues to engulf the city.

So I hear a lot of people talking excitedly about the buzz around Dublin at the moment, and it makes me uncomfortable. Such triumphalism is meaningless, and even grotesque, unless all we want is a superficially prosperous capital that’s a playground for tourists and rich suburbanites and are happy to ignore the inequality that is growing around us.