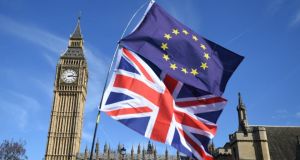 In a survey of more than 700 Conservative Party members, two in three were sanguine about the end of the UK union. Photograph: Facundo Arrizabalaga/EPA

Is Britain’s governing party still conservative and unionist? That last word was originally a reference not to the union with Northern Ireland, but with Scotland – and it is an attachment that ConservativeHome, the website I edit, recently decided to test, in partnership with the University of Winchester. We surveyed more than 700 Tory party members, and what we found was remarkable.

Twenty-nine per cent said that the break-up of the union would “finally end the unreasonable demands on England to provide ever-greater financial and political concessions to Scotland”.

In other words, two in three of those Conservative Party members are sanguine about the end of the union. And more than one in four seem happy for it to happen.

That a party who very name contains a commitment to the union has so large a soft underbelly of English nationalism may surprise some. But not, I suspect, many people in Ireland. To them, Brexit means the English putting what they see as their own interests ahead of everyone else’s. They also place Britain’s decision to leave within the context of the wave of nationalism and protectionism sweeping through western Europe and North America amid mass migration, technological change and job insecurity.

There is a different take on last June’s referendum result, which would point out that Wales also voted to leave the European Union, that the Leave campaign was led by pro-free trade politicians, and that the decision had at least as much to do with distinctive British ideas about sovereignty as a wider reaction to migration.

Brexit means change not just for the UK, but for the totality of these islands. There will be many different views of how it will work out

This narrative is unlikely to persuade an Ireland whose farming faces a grisly future if the Brexit talks break down. And even if they don’t, the knock-on effects of Britain’s looming departure will be baleful for Ireland. It will take an Atlanticist, free market-orientated, English-speaking ally and neighbour out of the EU at the same time as Ireland faces a tax crackdown from the European Commission and is becoming a net contributor to EU funds.

Either way, Brexit means change not just for the UK, but for the totality of these islands. There will be many different views of how it will work out. Here are two of them.

The first is distinctly Anglocentric. The British economy booms as taxes and regulation are cut. Scotland’s first minister, Nicola Sturgeon, forces a second referendum on Scottish independence, loses it, and sees the SNP decline in the aftermath, with Scottish Conservative leader Ruth Davidson leading an increasingly confident Scottish opposition. Northern Ireland stays in the union. British prime minister Theresa May wins the 2020 general election by a landslide, and Labour begins to break up altogether – its pro-immigration heartlands in London going one way, and its anti-immigration ones in the north of England going the other. It crumbles as a significant presence in Wales.

In the wake of Scotland’s departure from the union, Northern Ireland is left as a token member only, its government shared uneasily between London, Dublin and its own people

In this scenario, modern Ireland’s self-image as a European country is too deeply set to see it leave the EU. But its membership becomes an unhappy one, as Dublin and Brussels snipe at each other over tax, Irish taxpayers grumble over their contribution and there is unhappy comparison between Britain’s free-floating future and Ireland’s prospects chained to a low-growth zone.

The second sees the break-up of Britain. There is no deal with the EU, and barriers go up – tariff and non-tariff. Investment into Britain stalls and companies flee. Recession follows. Scotland votes for independence. May’s government collapses in consequence, and a new centrist coalition emerges, stretching from Labour’s Keir Starmer through Tim Farron and the Liberal Democrats to the Conservatives’ George Osborne. What’s left of Britain applies to rejoin the EU, and is told that, this time around, membership means signing up to the euro and to the Schengen open-borders agreement. A referendum endorses these terms, and Britain joins on the same day as this newly independent Scotland.

This shrunken Britain scarcely includes Northern Ireland. First, the new “frictionless” Border with the Republic turned out to mean a great deal of friction indeed. There is no revival of terrorist violence, but plenty of democratic protest. In the wake of Scotland’s departure from the union, Northern Ireland is left as a token member only, its government shared uneasily between London, Dublin and its own people. Meanwhile, the Republic prospers.

These are stark contrasts, and what will happen probably lies between these two extremes. For example, Brexit could turn out to go swimmingly for most of Britain, but stickily for Northern Ireland, since the establishment of the Border as a new international frontier seems inseparable from border customs checks. Such a development could, over the medium term, cause some pro-union voters to look more sympathetically at future British EU membership and even perhaps at Irish unity. There variations seem endless. But all those who want to avoid the deterioration of British-Irish relations after a long period of slow improvement will draw some specific conclusions.

The main one will be about institutional arrangements between Britain and Ireland. The blunt truth is that much of the former is orientated towards one big city, London, from which the rest of the country can feel a very long way away indeed. The capital may have voted in a different way to the provinces on Brexit, but it shares a similar sense of distance from Wales and Scotland, let alone Northern Ireland – and Ireland as a whole. This is not going to change any time soon.

It is deeply unfashionable to suggest that politicians should take the lead about anything, anywhere. But the fact remains that the mechanisms of Anglo-Irish relations are in the hands of the politicians - the British-Irish Intergovernmental Conference, which links the two governments; the British-Irish Parliamentary Assembly, which brings together politicians from throughout the islands; and, above all perhaps, the British-Irish Council, at which the heads of Britain’s devolved administrations sit on the same basis as the prime minister and the Taoiseach. In the wake of article 50 being implemented and the Brexit talks beginning, the British government needs to start giving the conference and the council some real priority.

Perhaps the latter’s heads of government should meet more frequently, to probe the economic and political unknowns that are consequences of Brexit, and to try to chart a way forward. The strains on this co-operative structure will become even more testing if Scotland moves towards a second referendum on independence. But its survival and development are now an imperative. We are moving from a world in which the relationship between Britain and Ireland was contained within a common Europe-wide structure. Both countries and all parts of these islands urgently need a replacement.

Paul Goodman is editor of ConservativeHome