Una Mullally: Trump may learn the hard way you don’t mess with Texas 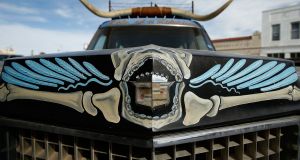 Early last Wednesday morning, the pedestrian bridge joining the American city of El Paso to the Mexican city of Ciudad Juarez had that recognisable start-of-the-day buzz of people heading to work. On the El Paso side, a queue formed outside a hole-in-the-wall breakfast burrito place.

In 2010, at the height of the war between the Juarez Cartel (fictionalised in Breaking Bad) and the Sinaloa Cartel, Juarez was the most violent city in the world, with more than 3,500 murders that year – 10 killings a day in a city of 1.3 million. Within five years, that murder rate had depleted to about 300. Last year it rose again, to more than 500.

Donald Trump built a campaign on demonising Mexicans. But as much as he desperately wants it, there is no post-election surge in support for him. There are not any massive rallies with people chanting “build the wall”. When you are in southwest Texas, the ludicrousness of such a venture snaps into focus.

Perhaps what’s most interesting is how Trump’s proposed intervention here is irritating not just the region’s Hispanics and Democrats, but conservative Texans. The state’s saying is “Don’t Mess With Texas” and it doesn’t tend to let anyone off the hook, be they blue or red.

Marfa is gorgeous and almost dreamlike – a place of clean lines and beautifully preserved (and modern) design, as if Copenhagen meshed with the Wild West. One installation is a 1km-long path with 15 massive concrete minimalist concrete sculptures. I got here, during an arts and music festival called Marfa Myths. No Country For Old Men and There Will Be Blood were filmed here. A sign for a taco spot reads “Bad Hombres”.

In the Lost Horse Saloon on San Antonio Street, I spoke to Josh, a Texan in his late 20s. The flow of his anti-Trump rant was interrupted only by the spitting of tobacco. “So, they’re all thinking, what’s a billionaire from New York City doing interfering with here?” Josh gestured south, towards Big Bend National Park and the border. “Seriously, you’re going to build a wall through our national park? Why?”

Big Bend traces the Rio Grande for more than 100 miles. “Big Bend Stands With Standing Rock” read signs in Marfa’s shop and gallery windows. “No Trans-Pecos Pipeline. No Dakota Access Pipeline. ” The Trans-Pecos Pipeline, due to be completed this month, will transport fracked natural gas through the Chihuahuan Desert and Big Bend.

Josh’s point of view might be idealistic, but the fact remains that the official Mexican workforce in Texas is huge, not to mention the undocumented workforce. Americans will be the first to admit many of these workers do jobs they won’t do.

The anti-Mexican racism spewed by Trump may have won enthusiasm from some white Americans looking for someone to blame for economic misfortune or the base-level fear-stoking of crime in a country where white people are perfectly capable of shooting each other without help from Hispanics. But the attitude towards Trump in southwest Texas gets to the heart of the irony of his masquerade as a Republican conservative. It is hard to get on a level with ranchers and cowboys and farmers and lads chewing tobacco in bars when you live in a gold penthouse in New York and a golf resort in Florida.

Much has been written about the demographic changes in Texas, as the state moves from a white towards a Hispanic majority. Here, in Presidio County, just 29.6 per cent of people voted for Trump; 66.2 per cent went for Clinton. In El Paso County, 69.1 per cent voted for Clinton, 25.9 per cent for Trump. The trend continued along the Tex-Mex border: Val Verde (51.4 per cent Clinton), Maverick County (76.5 per cent), Webb County (74.4 per cent), Zapata County (65.6 per cent) and Starr County (79.1 per cent). Clinton also won in Dallas, Austin, Houston and San Antonio.

“Don’t Mess With Texas” isn’t an empty phrase. The pride taken in self-reliance in south Texas, in neighbourliness and community, in connection to and knowledge of nature and the land, is being interrupted by the prospective irritation in some parts of walls going up, and unasked-for interference.

As the Lone Star State turns from red to purple to blue, Republicans might find that phrase ringing in their ears.