When pubs reopen, case numbers go up, but the figures tell a more complicated story 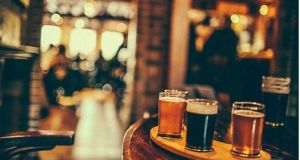 Coronavirus walks into a bar… and thanks to close indoor contact with those not from our own household, transmission of Covid-19 skyrockets. With this fear in mind the Government has once again delayed plans to allow pubs to reopen their doors.

And in what appears to be the final death knell for many in the industry, Micheál Martin even failed to confirm that they could reopen by the end of the year.

Politics is often a game of choosing between two bad options: this is no less true of what was undoubtedly a hugely difficult question for the Cabinet on Tuesday.

Rising Covid cases across the island has catalysed fears that pubs could see the R-rate tick up to unmanageable levels once again. But, equally, concerns about the viability of the hospitality industry are plaguing governments worldwide as they negotiate a careful balance between public health and revitalising limp economies.

“Make no mistake, this is a full-blown crisis,” said Donall O’Keefe, chief executive of the Licensed Vintners Association.

The decision “will be met with both fury and despair across the entire sector”, he added, citing “intolerable pressure” on the 3,500 pubs across Ireland that had been expecting to reopen, alongside their staff, suppliers and the industry as a whole.

Minister for Health Stephen Donnelly has cited “international evidence” as good cause to keep the pubs closed. Yet looking across the Irish Sea could perhaps offer some clarity.

Rising figures will always be concerning, but interpreting the data with a level head, giving due consideration to the context, is critical

Pubs have been open in the UK for weeks now – with strict social-distancing measures. These are, at worst, minor impositions that limit the risk of contagion while also allowing people to spend money and (no less important) begin to enjoy a social life once again.

And it is true that infection figures are on the rise in the UK. On Tuesday there were 670 newly recorded cases, up from 581 the previous week. As measures to reopen the economy come into effect, this is an unfortunate inevitability. But contextualising these figures is important too.

The UK has massively increased its testing capacity, and has also targeted its testing in areas with already high infection rates. It is not a point that requires labouring that more tests will see more positive cases; nor need it be said that testing in areas with high infection rates will yield more positive results than testing randomly across areas with little to no community transmission at all.

Rising figures will always be concerning, but interpreting the data with a level head, giving due consideration to the context, is critical.

The biggest critics of reopening the pubs in the UK could hardly contain their glee when, just days after first being allowed to open their doors, four pubs were forced to close after positive cases were identified from either punters or staff.

Yet rather than this being proof that pubs should never have been allowed to open at all, it instead proves that the system is working.

Because if we choose the path of living alongside the virus, rather than opting to try and eradicate it altogether (something that is possible for Ireland, but not without great cost, including an effective shutdown on international travel, hard for a nation of millions of emigres), then systems of localised lockdowns, and publicans having the good sense to close their doors when required is critical.

And for all this to work functioning test-and-trace systems need to be in place.

Thankfully, Ireland’s contact-tracing app has been roundly praised at home and abroad. So too is Ireland’s testing regime operating at a considerably higher level than before.

Donnelly was not wrong to say that “when you open up the pubs… the number of cases does go up”, but the figures tell a more complicated story than it initially might seem.

And taking its cue from the UK, Ireland could realise that allowing pubs to reopen in a highly managed – and constrained – manner is possible. And critical to the survival of perhaps hundreds of pubs that sit at the centre of our communities.

All of this, of course, points to an obvious but perhaps slightly unexamined principle: this is not a simple trade-off between public health and restarting a limp economy.

Rather than indulging in a crassly wrought binary we should realise that public health and the economy are actually symbiotic – the economy cannot function to a healthy extent if the population is burdened with sickness. Yet at the same time a nation with a weak economy is, of course, not one adept at protecting the health of its people.

Allowing pubs to reopen in a safe and managed way is not an impossibility. Rising infection figures in the UK and Ireland may be worrying but they are inevitable, and as much a product of increased localised testing and contained outbreaks as they are a function of the R-rate spiralling out of control.

If we are going to learn to live with, not against, the virus, careful balancing acts need to be struck, and difficult decisions like these need to be made. No one should envy those who have to make them.