Trump turns sights on Ireland as he gets tough on trade

Pharmaceutical sector vulnerable if US president gets tough on trade

Speaking in January 2017, then US president-elect Donald Trump outlines his plans to crack down on the pharmaceutical industry, something that could have consequences for Ireland. Video: Reuters 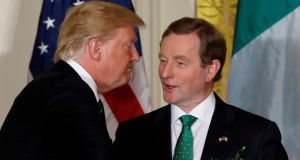 US president Donald Trump with Taoiseach Enda Kenny at a St Patrick’s Day reception at the White House, where Kenny stressed the two-way nature of Irish-US trade. Photograph: Jonathan Ernst/Reuters

Chinese premier Xi Jin Ping travels to Florida today for what promises to be one of the most closely watched meetings of Donald Trump’s presidency.

While foreign policy, particularly North Korea, will be high on the agenda, the two leaders will also hold their first discussion on trade. Mr Trump warned last week that the meeting would be “very difficult,” tweeting: “We can no longer have massive trade deficits and job losses.”

China’s alleged role in usurping US jobs and Trump’s pledge to tax Chinese imports and brand the country a currency manipulator was a regular election campaign refrain.

His appointee as head of the National Trade Council, Peter Navarro, is a zealous critic of China, who blames China’s economic ascent and accession to the World Trade Organization for the loss of millions of American jobs.

As with all of Trump’s policies, the question is whether Trump’s promises can be delivered as the president battles against the realpolitik in Congress. So far on trade, the signs have been mixed.

The move by the G20 to drop a commitment to anti-protectionism at the behest of the US last month, suggested a major shift by the world’s largest economy. However, the two executive orders on trade signed on Friday, including the commissioning of a country-by-country analysis of American’s trade deficit, including Ireland, were to many, relatively tame.

Trump’s fixation on reducing American’s trade deficit, which has existed since the 1970s, has particular ramifications for countries with a trade surplus in goods with the US.

Ireland’s inclusion in the list of half a dozen countries which will be subject to analysis by the US department of commerce should be worrying for the Irish Government.

Official US trade figures show Ireland exported $45 billion worth of goods to the US last year, with the US exporting $9.5 billion in return into Ireland (though Ireland runs a big trade deficit with the US in terms of services). The resulting US trade deficit of $36 billion has been identified by the Trump administration as a concern.

Unsurprisingly, much has been made domestically of the contribution of US foreign direct investment to the Irish economy, which reached more than $340 billion last year according to the American Chamber of Commerce.

Furthermore, in contrast to some international perceptions of Ireland as a haven for brass plate companies, US companies are big employers in Ireland, employing an estimated 150,000 people, mostly in highly paid jobs.

But the problem is that much of the product produced by these well-paying manufacturing jobs is shipped out of Ireland and exported back to America – exactly the practice Trump wants to target.

The pharmaceutical sector and medical devices represent the bulk of Irish exports to the US by American companies. Ireland is the second highest exporter of medical devices into the US after Mexico, shipping everything from stents, to diagnostic equipment to contact lenses, back into the US market, some by US companies and some by indigenous-owned firms.

Trump’s policy is to try and bring some of this manufacturing activity back to the United States. Currently there are two main possibilities of achieving this under discussion in Washington.

First, lowering America’s corporate tax rate, which at 35 per cent for federal tax alone is among the highest in the world.

Secondly by introducing a “border adjustment tax”, a more contentious proposal that would tax imports but not exports, and which is likely to face fierce opposition from some Republicans and big Republican donors, who fear the effect on consumer prices.

Ross told reporters ahead of the signing that the analysis would keep an open mind on the benefits of imports in some cases – citing the example of US oil imports from Canada, for example, which America needs. It is more difficult to see how companies can justify keeping pharmaceutical production outside America.

The pharmaceutical industry was discussed by Trump and Taoiseach Enda Kenny during their bilateral meeting in the White House. Throughout the St Patrick’s Day visit, Kenny stressed the two-way nature of Irish-American trade, noting that Irish companies in the US employ tens of thousands of Americans.

In this sense the Government was taking a leaf out of the Chinese book, with Xi JinPing expected to woo Trump with talk of further Chinese investment in the US during this week’s meetings.

Irish officials are also likely to highlight the huge trade surplus in services the US has with Ireland, which benefits America.

One of the ironies of Ireland’s emergence at the top of the table each year in euro zone growth figures was that most of the country’s exports were to non-euro countries like Britain and the US.

With Brexit posing a major risk to Irish exports given Theresa May’s pledge to take Britain out of the single market, Ireland can ill-afford instability in another export market.

Whatever his next steps on trade, Trump’s tax and trade policy is likely to be the dominant issue guiding Irish-US relations in the coming months and years. Suzanne Lynch is Washington Corespondent