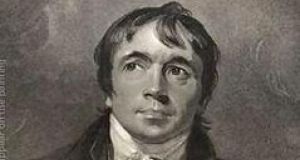 This year marks the 200th anniversary of the death of John Philpot Curran, Ireland’s most widely known barrister. Curran’s speeches were edited and collected by Thomas Davis, and were widely printed in the 1840s, even being recommended to Engels by Karl Marx.

Curran was born in 1750 in Newmarket, Co Cork, into a modest Church of Ireland family, was educated to secondary level and thereafter, at Trinity College Dublin.

He was called to the Irish bar in 1775 and practised on the Munster circuit, “took silk” in 1782 and prospered.

The following year, he entered parliament for Kilbeggan and was associated with the progressive elements in the legislature.

Curran was not famous for his legal learning and mostly relied on others to “make up the law’”. However he was renowned for his wit, imagination and humour, good or wicked.

Many of his utterances were subsequently adopted and universally glossed. In July 1790 before the privy council, concerning the election of the lord mayor, he said “the condition upon which God hath given liberty to man is eternal vigilance”, which later gained currency as “eternal vigilance is the price of liberty”.

By the mid-1790s, Curran was a leading criminal and civil advocate. His cases provided ample opportunities to voice dangerous views on emancipation, parliamentary reform, democracy, liberty and free speech. In some cases, he sailed close to the wind. When a legal team came into being to defend the United Irishmen, Curran led a panel, which included Leonard McNally, Thomas Addis Emmet, John and Henry Sheares, William Sampson, Pleasant Ned Lysaght and others. Matthew Dowling, a leading United Irishman, was frequently the solicitor. Defending such cases was not necessarily respectable, or likely to advance a barrister’s career.

By 1797, Curran’s reputation was never higher – he was characterised by the Sham Squire as “the leading advocate of every murderer, ruffian and low villain”, praise indeed. When the informer James O’Brien came as a witness to Green Street on January 16th, 1798, to testify against Patrick Finney for high treason, Curran cross-examined to devastating effect. Finney was acquitted and cases against many others were dropped. Curran’s speech was widely circulated and O’Brien execrated.

Ballads were written about O’Brien, whom Curran then prosecuted for a murder which resulted in O’Brien’s execution. A ballad of the time is entitled “Jimmy O’Brien’s Minuet as Performed at . . . No 1 Green Street”, the place of execution at Newgate Gaol.

There were few acquittals after the Finney trial, and the trials of the 1798 rebellion bore heavily on Curran. During his final speech in the trials of the United Irishmen, arrested following a raid on Oliver (Cromwell) Bond’s house, Curran is said to have turned to the hostile crowd in court and stated “you may assassinate, but you shall not intimidate, me”.

He was disappointed to secure, in 1807, the office of master of the rolls, a well-paid sinecure, but lacking kudos. In his last years, Curran travelled much, enjoyed the dinner party circuit, chiefly in England, and was known to Shelley, Byron and Madame de Staël.

He had a large family by his wife, lived chiefly on a small farm in Rathfarnham called the Priory, the buildings of which fell into ruins in the 1940s and have now mostly disappeared under a housing estate.

Although he was best known as the father of Sarah Curran, another daughter, Amelia, was the painter of Shelley.

His private life was paraded in public when he unwisely sued the Rev Sandys for seducing his wife, and received paltry damages from a Dublin jury who heard of his own misconduct. This case was heard on February 14th, 1795. Thereafter, with Marianne Fitzgerald, a widow from Tipperary, he had two sons, born in 1798 and 1800, who went on to inherit most of his fortune.

Curran died in London on October 14th, 1817. Subsequently, his remains were brought to Glasnevin cemetery, where his imposing granite sarcophagus bears just the word “Curran”.

This year, 200 years after his death, the Bar of Ireland laid a wreath on his tomb and is holding a number of events to celebrate his life and work.

He was, in the words of Leonard McNally, a man “whose honest and intrepid heart was never influenced in the Senate, nor intimidated at the Bar from exerting with zeal, independence and spirit, his love to his country and his duty to his client”.

1 Ciara Kelly: I was pregnant, unmarried, a junior doctor and I got old-school comments
2 Suspected murder-suicide shooting in Cork leaves father and two sons dead
3 Son (23) who died in suspected Cork murder-suicide was due to graduate
4 Third person arrested in education board corruption investigation
5 ‘Shellshocked’: Outrage in Australia after women on flight strip-searched in Qatar
Real news has value SUBSCRIBE