The recession is now in the rearview mirror

Go Ireland! You have officially come out the other side of the great recession of 2009 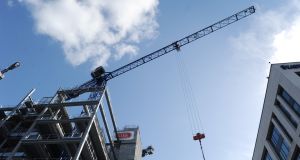 The cranes on the Dublin skyline are back, and the M50, well, it’s a car park again. Photograph: Aidan Crawley

I must have been the only Australian on that aircraft when I flew to Ireland in 2010. In contrast, flights the other direction were almost certainly packed full of Irish millennials leaving to seek opportunities and sunshine in Sydney, Perth and Melbourne. Just as many of them came home eventually. And now the time has come for me to take that return flight to Sydney after nine years in Ireland.

I still recall sitting in a meeting in Dublin during my first Irish week, all bristling with optimism and energy in front of a sombre suited detachment from the Bank of Ireland. They must have thought I was mad, another retailer thinking growth was just around the corner. A headshake and a firm no was what I got; it wasn’t going to get better in a few years . . . they said. Someone called it a lost generation. This was in 2010.

But retailers are perennially optimistic; we always think this weekend will be better than the last, next year things will be looking up, and sluggish sales are behind us. It’s our trader DNA.

The retailers of Ireland were determined to slog on, keep going and fight. Many fought simply to keep their homes and family businesses. Tough bunch, Irish retailers. Just a little Government help with upward-only rents would have been nice – help which came too little too late for many.

I remember driving down the quay on the Liffey past the O2 (now the 3Arena), and being barely able to comprehend the forces which could pause those massive construction projects, leaving only the ghosts of unfinished concrete buildings to haunt a promenade of unfulfilled Celtic promise.

One would later be a gleaming gilded office to the Central Bank and a symbol of recovery, but the irony of that particular shell sitting derelict should not be lost on anyone today.

By the time the worst was over, more than 50,000 jobs had been lost in Irish retail, a bloodbath by any account

I have often said that retail isn’t dying, it’s only bad and boring retail which is dying. If nothing else, the Irish crash itself – coupled with high levels of debt and the changing ways we shop – only accelerated the demise or pain for brands such as Clerys, Peats Electronics, Ladbrokes, Atlantic Homecare, Xtra-vision, B&Q, Cost Plus Sofa, Homebase, HMV, Arnotts, Debenhams, and that list goes on. By the time the worst was over, more than 50,000 jobs had been lost in Irish retail, a bloodbath by any account.

It’s hard to live through all that, and not be affected by it. I feel like it has helped forge who I am, it’s given me a sort of borrowed sense of being Irish, which I will take with me forever.

My wife and I had three wonderful Rotunda babies, I completed my MBA and became a Trinity Alum (trinners is for winners Leo!), I cheered inside when Enda Kenny made the cover of Time magazine, was saddened by the loss of Brian Lenihan and Gerry Ryan, introduced my four year old to the joys of the Late Late Toy Show, felt pride when the gay marriage referendum passed, woke up in utter disbelief to the Brexit vote, and watched a country elect a poet as its president.

And those cranes on the Dublin skyline . . . they’re back, and the M50, well, it’s a car park again. And so, what others will only whisper in hallways, or admit quietly in dark corners of local pubs, I will declare publicly at great risk of angry retorts. It’s over, Ireland. You have officially come out the other side of the great recession of 2009, and more people should start saying it.

It’s time to exhale, dust yourself off, and take a quiet moment to reflect. It’s all now in the rearview mirror. In fact, in this expat retailer’s humble opinion, and barring a Brexit debacle, a decade of prosperity is now there for the taking.

1 Connell losing touch with club championship is real tragedy of Normal People
2 Normal People Class of 2020: The nine college friends in the series
3 We need to pay very close attention to what is happening in Britain now
4 Seven great Irish escapes to rent when lockdown lifts
5 Remaking Ireland: Five positives from the pandemic
Real news has value SUBSCRIBE