The Quack of Doom – An Irishman’s Diary about WB Yeats, the Sopranos, and wild ducks 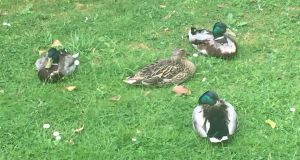 Even for urban ducks, they seem extraordinarily relaxed around humans

I came home one night recently to find that, as usual, the ducks were outside our door, waiting to be fed. For readers who missed the opening dispatch last week, these are the same ducks – a female and three drakes – that had taken up residence on my front lawn some days earlier.

Not wishing to be bad hosts then, we left out food and water. Also a paddling pool.  Now, only days later, the relationship had advanced to the extent that they were expecting regular meals.

As it happened, this night, we were out of porridge oatlets, their favourite. So I had to make a detour to the shop to buy more. But as I returned, minutes later, a four-duck aerial formation was ascending into the sky ahead, pointed towards the river. And when I reached the house, sure enough, they were gone.

It shouldn’t have been a surprise to see ducks fly away. Yet somehow it was. They look so earth-bound while on the ground.

With their quacks and waddles (exacerbated in the case of one of the males, who had a limp), they also seem to be the comedians of the bird world. You half-forget they have superpowers until they take off again. Then even the lame duck looks majestic.

Of course their departure was a good thing, I knew. We never meant to turn them into pets, or encourage them to drop out of the duck-race and live off charity. Even so, without them, the garden seemed suddenly lonesome.

For wild animals, they had been very personable: especially Hopalong, who was mildly persecuted by the other males but had worked out that the humans discriminated in his favour and that he could eat at the same time as the alpha male, so long as somebody stood between them. Now, without that and their other mini-dramas, I was bereft.

Before I could begin therapy or arrange to have my enemies whacked, our feathered friends were back, after a 24-hour sabbatical

There is a dangerous precedent in this sort of thing, as fans of the classic TV series The Sopranos may remember.

That show opened with the temporary residency of a family of ducks in Tony Soprano’s New Jersey garden.

For a time the mobster enjoys their reassuring presence: welcome distraction from the pressures of killing people. Then one day, he sees them fly away and it triggers the first of the panic attacks that sets up the central paradox of the series: a Mafia capo who visits a therapist.

There’s an interesting theory that the Soprano ducks, unusually for Mafia movies, were a reference to the writings of WB Yeats, specifically The Wild Swans at Coole. This became plausible when, much later in the series, the scriptwriters featured another Yeats work, The Second Coming, to foreshadow a doom-laden end.

That suggested the whole saga had been book-ended by the Irish poet. After all, seeing the swans scatter, he too has a crisis. “I have looked upon those brilliant creatures/And now my heart is sore”, he writes, thinking about all the changes that have happened in the years since he first saw them. Soprano is similarly haunted by the past, and the impermanence of things.

Anyway, whatever about the mobster, it turned out that my lament for the ducks was premature. Before I could begin therapy or arrange to have my enemies whacked, our feathered friends were back, after a 24-hour sabbatical. That has since become the pattern. They disappear for spells, sometimes overnight, but still spend long periods on our lawn, consuming porridge and water at alarming rates and crapping everywhere.

There’s a courtship/breeding process afoot, clearly, but with a lot of sitting around and no action.

Why they chose here remains a mystery, as is the question of whether the female is the same one that passed through recently with 10 new-born chicks. If so, she must have lost them. But it could be a different duck, in which case word may have spread that we’re operating a bird sanctuary.

One theory is that our guests are on the run from the Sopranos of the river: mink (another American species known for extreme violence). That’s possible.

In the meantime, even for urban ducks, they seem extraordinarily relaxed around humans.

As I stood in my doorway yesterday, looking out, the female waddled past into the hallway, hoovering up stray oats. When I muttered “make yourself at home, why don’t you”, she did, briefly: peering into the sitting room and having a look around. Then she left, without a quack. But I suspect she is now in the market for a place to lay eggs.