Playing ducks and drakes: An Irishman’s Diary about some unexpected guests

The way she went involves negotiating a 30-foot escarpment, steep and densely overgrown 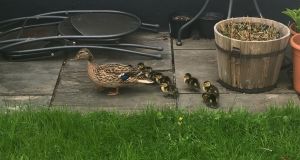 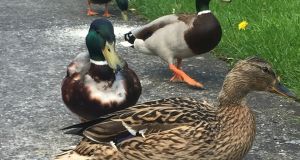 We don’t get much through-traffic in our road, normally. It’s a cul-de-sac, and our house is at the cul end, where there’s only pedestrian access. So it was doubly surprising recently to witness a procession of ducks, on foot, past our front garden.

They was a mother and 10 new-born chicks. Which, as I’ve since learned, is an exactly average mallard family. Unlike swans, duck fathers tend not to hang around beyond the procreative phase, unless emergency back-up insemination is required – a subject to which we’ll return.

But there are few things in nature more charming than the parade of a mammy duck and her babies, and we were transfixed while it lasted. It had comedy too because, nervous of her audience, the mother took a few detours, in and out of hedges, behind recycling bins, through a flower bed, and so on.

The ducklings followed these twists heroically, trusting that she had a plan. And so she had. She was headed for the communal garden at the road’s end, where they followed her under the gate. Then they all disappeared into bushes and were gone.

In some ways, the garden was an ideal sanctuary. It’s free from traffic and, mostly, from people. Also, pending repair of the community lawn-mower, it currently has grass long enough to support at least two cows.

But what it doesn’t have is easy access to the river. And if I’d had time during all this to Google the question “Are mother ducks and their new-borns always heading for water, or is that just a cliché?”, I might have been tempted to intervene in the mother’s plan.

For although the way she went is certainly one route to the local river, it does involve negotiating a 30-foot escarpment, steep and densely overgrown. The drop probably wouldn’t kill a duckling: there’s too much in the way. But even for a duck super-mother, it would be a logistical nightmare to get 10 chicks down together.

Readers may have seen a YouTube video from the US some years ago in which a duck hatched on the balcony of a city building, and then flew to the ground. The chicks threw themselves off the ledge in quick succession while a hero banker (it was 2008, when bankers needed good publicity) caught each one. Then the family marched off through the streets, with a police escort.

Alas I fear our visitors may have been less successful. Or maybe it’s just a coincidence that, a day later, another female duck turned up in our garden, this time with male suitors. Perhaps word has spread, and the first duck’s sister has decided to start a family here too.

There are three drakes: one clearly dominant. He eats any food we leave out at the same time as the female, while the others wait. One of the non-dominant pair is a lame duck, literally, and both others pick on him. But we feed him too and he’s hanging in there, gamely.

They have made very pleasant guests, so far, despite the sexual tension and build-up of manure. Ducks seem to have a calming effect on people. Or maybe I just think that because I grew up on a farm. Anyway, the saga continues: I’ll report developments.

In the meantime, by coincidence, an email has arrived about an event in Dublin “on the relationship between human beings and animals”. It will involve and interview with Allain Bougrain-Dubourg, a French celebrity environmentalist, who readers may remember from another viral bird video of recent years.

That arose from his attempts to expose illegal finch traps on farmland in the south of France, and gave rare insights into Southern French man in his habitat. This newspaper summed up the footage as follows: “Man in underpants attacks French bird activists with shovel”.

Happily, no shovels are expected in Alliance Française, where the interview (in French) takes place next Monday, at 6.30pm.

1 Covid-19: Hairdressers, gyms and religious services could return next week
2 Bloomberg ranks New Zealand top in fight against Covid-19 - but how did Ireland fare?
3 How to gift your child a house deposit . . . tax free
4 Q&A: When will we know more about plans to exit Level 5?
5 Alison Curtis: My guilt at not going for a second pregnancy
Real news has value SUBSCRIBE