An Irishman’s Diary about the hidden gems of Dublin 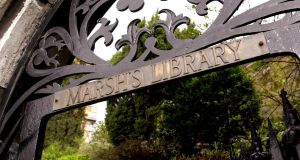 Marsh’s Library: Hardened scholars know where it is, and have been poring over its contents since 1707. Photograph: Bryan O’Brien

In writing about Count Taaffe – late of the Austro-Hungarian Empire and 1960s Baggot Street – yesterday, I neglected to mention the other thing for which he was famous. Browsing in a Dublin jeweller’s shop once, he discovered one of the world’s rarest gemstones.

His find was all the more unusual – unique, in fact – because the stone was already cut and faceted. But the mineral had hitherto escaped the notice of gemmologists, a profession of which Taaffe was considered a “brilliant if unorthodox” member.

So once the discovery was confirmed, it was named after him. Occurring only in Sri Lanka and Tanzania, Taaffeite remains one of the world’s rarest gemstones today, and the only one ever found in this manner.

The Eureka moment happened in October 1945, when he visited the premises of one Robert Dobbie, a watchmaker in Fleet Street. Dobbie allowed him to go though boxes of old jewellery fragments, to sort out the glass from the gems, and make an offer for anything valuable.

Several hours later, Taaffe had amassed between 50 and 100 items of interest, including opals, emeralds, and the odd Siam Ruby. He paid Dobbie £14 for the lot. Then he took them home and washed them – they were filthy. After that he sorted them by colour, and put the Taaffeite – which he then assumed to be a more common spinel – with the violet and lilac group.

From there he went to work with the science of his trade, but without the help of a refractometer. This was considered an essential tool by experts, and his lack of it must been part of the “brilliant if unorthodox” judgment of contemporaries. He magnified the unusual gem, confirmed its double refraction and other qualities, measured its specific gravity in various solutions including bromoform, and grew very puzzled.

Eventually, in his own words: “I panicked, sent the stone to B.W. Anderson at the Laboratory of the London Chamber of Commerce, and begged for help.” It sounds as if the laboratory panicked too. In reply, Anderson referred to “that mauve spinel” but added: “My colleague is so horrified at its anomalous optics that he doubts whether it is spinel [...]The stone is so remarkable that I should like to have an X-Ray analysis made”.

The rest is gemmological history, as recorded (like the above) in Anderson’s 1951 paper. By then, a second sample of the stone had been found, this time in London. But by the time Count Taaffe died in Dublin in 1967, there were still only four specimens known.

Might there be more such rarities lurking somewhere in Ireland, even now? Well, I can’t comment about gems of the literal kind. But about the figurative kind, I can confirm the answer is yes. Because even as I wrote this column, by serendipitous chance, an invitation arrived by post to the opening of an exhibition in Dublin next week of what are billed as “the rarest books in the world”.

The venue is Marsh’s Library: itself a rare gem among the city’s tourist attractions and one of the few buildings anywhere to fully merit that estate agent’s undying cliché: “tucked away”.

For three centuries it has hidden in St Patrick’s Close, near the cathedral, with an entrance so modest you could blink and miss it. But hardened scholars know where it is, and have been poring over its contents since 1707, sometimes while locked in cages to protect the goods.

That the goods needed protection was illustrated by a recent exhibition there, Hunting Stolen Books, which featured works that had at some point gone missing from. The paradox of the new show is to display material that has been around for centuries, undisturbed, because it was hitherto of little interest.

In fact, Marsh’s partnership with the Universal Short Title Catalogue (USTC) project has revealed the library to have the world’s sole surviving sample of at least 387 books and pamphlets, and the number is still rising.

Most would not be valuable for anything other than rarity. They tend to be what director Jason McElligott calls the “ugly ducklings” of the collection, and unlike Count Taaffe’s gems, would not be improved by washing. In any case, some libraries have reacted to the USTC scan by consigning their extreme rarities to the vaults. Marsh’s, to its credit, is putting them on display.