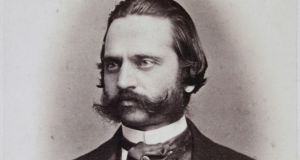 Many years ago, in circumstances now lost to memory, I was forced to sit through a film called Mayerling. It was about a notorious incident in 1880s Austria that culminated in an apparent murder-suicide pact involving Archduke Rudolf and his 17-year-old lover, and continued to have political ramifications all the way up to the assassination of another Archduke, in Sarajevo in 1914.

Of several movies made about the affair, it must have been the 1968 one, starring Omar Sharif and Catherine Deneuve, I saw. Halliwell’s Film Guide calls that “a tedious dramatisation” of “turgid romance”, which would be about right.

Maybe it was a misguided teacher who made us watch, thinking it would be educational.

Instead, all I remember now is feeling that the film took up an inordinately long period of my then-young life. Halliwell’s must have felt the same: they called it “endless and boring” too. Paradoxically, they also say it lasted only “141 minutes”. But even so, I’m sure it was the first film I ever left reflecting ruefully on the shortness of life.

Anyway, I had somehow forgotten that grim experience until a recent conversation with a friend turned, by very circuitous route, to the subject of a man called Count Taaffe: an Irish-Austrian aristocrat who spent his later years living in Dublin’s Baggot Street area and died there in 1967, a year before the film came out.

In this last respect, at least, the Count could consider the timing of the demise a small mercy. Otherwise, he would have felt compelled to watch the film, for family reasons. Because inevitably, although I’m only learning this now, it turns out there was an Irish angle in the Mayerling incident, through this man’s grandfather.

Eduard Taaffe had been Austria’s prime minister at the time of the scandal. He was deeply involved in subsequent inquiries. He must also have been implicit in the cover-ups, which at the very least included presenting the archduke as insane, so that suicide would not prevent a Catholic burial.

But darker rumours, including a suggestion that the murder-suicide was in fact a murder-murder, politically-motivated, have persisted ever since. Emperor Franz Joseph claimed the truth had been “far worse than any of the versions”. And rather than consign them to State archives, he is believed to have handed all papers on the affair to his trusted PM, who took them into retirement.

They later devolved into the ownership of the Dublin Count Taaffe.

And then there was Flann O’Brien: a danger to himself as much as others

As to where they are now, the Vatican has been suggested as the mostly likely location. But as Godfrey Fitzsimons wrote in this column back in 1995, one of the last people to have the inside story on Mayerling was a man who lived in 1960s Baggot Street and drank in Doheny & Nesbitt’s. Alas for history, he was not as talkative as some of the more famous residents of that area then.

Today, by the way, would have been the 100th birthday of one noted Baggotonian: artist and writer Desmond MacNamara. Born in Mount Street, he was real-life friend to Brendan Behan, Patrick Kavanagh, Flann O’Brien and many others, while he also achieved the ultimate literary distinction of becoming a fictional character, as MacDoon in JP Donleavy’s The Ginger Man.

MacNamara’s obituaries noted his talent for “diplomacy”. That must have been a much-needed quality in mid-20th century Baggotonia, as a short but fascinating letter this week has reminded me.

It comes from Oliver Hunter, now a Belfast doctor who, in the 1950s, was a student living in the Baggot Street/Waterloo Road area. Behan once occupied a flat opposite, he recalls. And while keeping neighbours awake at night would normally be the medical students’ job, roles were reversed. It was the students who “would be screaming out the window for him to shut up”.

As for Kavanagh, Oliver recalls always wanting to cross the street when he approached. “He looked violent with his shirt wide open in the middle of winter. [I was] scared he was going to hit me”.

And then there was Flann O’Brien: a danger to himself as much as others. As noted here last week in connection with his newly-published Collected Letters, he was extraordinarily (car) accident-prone.

But on the occasion Oliver met him, there was no vehicle involved. He was “lying semiconscious with a large gash in his forehead”, having had a violent altercation with the ground. Oliver half-carried him to Baggot Street Hospital to be stitched, and adds sadly: “this would seem to have been a common occurrence”.