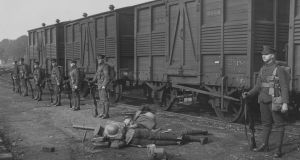 The pandemic has curtailed public commemoration of the events of 1920. But it has not diminished our determination to remember the dead, and to express an enduring respect, as witnessed by the moving tributes to those who lost their lives on Bloody Sunday. Perhaps the greatest achievement of this decade of commemoration has been to shine the light of memory not solely on the pantheon of leaders and heroes who won our independence, but on the burdens borne by ordinary men, women and children. Just as important as the official history and scholarship are family memories passed down through the generations that followed those traumatic years.

Martin White began his working life as a cleaner in the Great Southern & Western Railway in 1909. Until his retirement half a century later (co-incidentally in the week of my birth, his first grandson) he was a conscientious and dedicated railwayman and trade union activist. His own story is told in two essays he wrote for the Journal of the Irish Railway Record Society in the early 1960s. “Recollections of Rosslare” opens with his first day at work and an assignment “to clean engine No. 199 (Class J15) of which my brother Alex White was then driver”. The railways were so often a family affair. Ten years later Martin was given compassionate leave to care for the same brother, a victim of the flu epidemic of 1919, “remaining at his bedside until the end”. The War of Independence meant conflict on the railways. There were ambushes and pitched battles. In Martin White’s native Clonmel a steam engine was used to block the tracks with derailed rolling stock. Other engines were, he writes, “rendered hors de combat until the end of the Civil War, when they were put in order by a fitter from Waterford, aided by a local blacksmith!”. The munitions strike – or embargo – began when dockers at Dublin port refused to handle war materials being imported into the country. The action quickly spread to the railways and became an important element of the independence struggle in the second half of 1920. Martin White had been promoted from fireman to engine driver in Waterford in June. This meant he would likely find himself in charge of a train boarded by British armed troops – as shortly thereafter occurred: “About 10.30am a detachment of the Devons arrived on the platform and entered my train. When starting time arrived the Guard gave me the green flag, but I remained stationary. I was thereupon accosted by the officer-in-charge who was accompanied by Traffic Inspector Hurley. I was asked my reason for not starting the train and replied ‘I refuse to work the train whilst British armed forces are on board’. The Inspector then instructed my Fireman to uncouple the engine and informed me I was to proceed to the shed. On arrival there I was told by Mr C H Capsey, the Locomotive Superintendent that my service with the GS & WR was terminated for refusing to carry out my job as a driver”.

I have often wondered what it must have taken for Martin White to defy the troops that day, thereby risking his livelihood. It is a family story of some heroism, often recounted by my late father Robert, also a train driver.

Tom Johnson was leader of the Labour Party and a critical figure in the events of late 1920. Days before Bloody Sunday he declared that the railwaymen “were making an assertion that as workmen they had a right to be conscious co-operators in the end that was being sought; that in their work they were not merely cogs in the industrial machine, but were human beings”.

By the end of November passenger rail services had virtually ceased in large parts of the country. The economic impact was real, threatening unemployment and social dislocation. A decision had to be made about whether to fight on. On December 21st, the railwaymen met in the Mansion House and voted unanimously to return to work.

Martin White was a lifelong member of the Aslef trade union and of the Labour Party. However, he makes no reference to meetings or votes, stating simply that: “When the munition strike was called off at the end of 1920 (on the instructions of the late General Michael Collins) I was reinstated, together with all the other drivers who had lost their jobs under similar circumstances”.

Charles Townshend has written that the impact of the munitions strike “was as much moral as physical”. For its part, the Irish Labour Party & Trade Union Congress concluded that “despite the apparent ineffectiveness of its conclusion it was a fight well worth waging, if only as an example of the willingness of Irish workers to risk their chances of livelihood for a noble cause”.