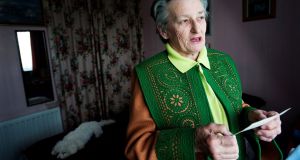 Irish authorities have drawn censure for the slow intake of Syrian refugees as part of a relocation programme, but perhaps they could take a salutary lesson from the altruistic acts of a previous administration which took in hundreds of European migrants under similar circumstances 60 years ago this month.

Exasperated by an oppressive atmosphere and the lack of opportunity to express free will, a generation of young Hungarians sought to overthrow the country’s Kremlin-backed and avowedly communist leadership in a bloody and short-lived revolution in October 1956.

The uprising ultimately failed as the Russian tanks were eventually called in, and they sent a brutal message to any aspirant rabble-rousers in Soviet satellite states by killing 2,500 civilians and displacing hundreds of thousands more.

The sight of a young child being mercilessly gunned down in the street by a Russian soldier was a last heinous act that prompted her to leave her homeland, and she ended up among a contingent of over 540 compatriots granted asylum in Ireland in November 1956.

Over the din of builders working on renovations to her home in Moyross, Limerick city, the 77-year-old is able to give a vivid recollection of the day she first arrived in the converted army training camp in nearby Knockalisheen.

“I really didn’t know what to expect. We were a bit disappointed when we were brought here,” explains Murphy, who initially had her sights set on a new life in the US.

“But what was most disappointing was the accommodation out in Knockalisheen, it got very cold out in the winter, it was only a timber barracks.”

By all accounts, the camp was ill-equipped to deal with such an influx of permanent residents, and as the months wore on the realisation dawned on its inhabitants that they would be remaining indefinitely rather than as a mere stopover.

It was a realisation that prompted general disquiet and even a hunger strike.

She is eager to dispel myths about the protest that, reportedly, caused great hurt to the scorned locals.

After two years in the custody of the State, Murphy and her fellow exiles were granted permission to disperse to their destinations of choice across the globe, including Canada, Australia and the US.

She was among a select group who stayed – one family decamped for Dublin while another took up employment at a textiles plant in Youghal – and she went on to get a job, marry an Irishman and raise a family in the Treaty City.

Murphy is now the only evidence that remains of the group who transited to Ireland all those years ago, and she has gone on to tell her story over the national airwaves, as well as at an audience with President Michael D Higgins.

Indeed, the “Magyar from Moyross” has even become something of a local celebrity in the process.

Asked about the current Irish Government’s response to a modern refugee crisis, in light of recent figures showing that the State has accepted just one unaccompanied migrant from Greece as part of an EU relocation scheme which is lagging far behind targets, she says she understands the reluctance to sanction such a large sudden intake, as happened in her own case.

“I have nothing against people coming, I understand their situation, but you don’t know who you’re taking in now. They have problems in Belgium, France, parts of England. That’s the problem now, it’s who’s coming in, not how many,” she says.

“I know what it is to leave your country, I understand their situation. But Ireland has its own homeless. Look at the situation with the housing now. Let Ireland take in as many as they can cope with, not as many as Angela Merkel tells them to take.”

“Don’t expect to become rich or employed straight away . . . hide your disappointment, because you have to think back to what you left behind. They can put their heads down now and say ‘I’m going to have a good night’s sleep’ which they weren’t able to do when they were in their own country.”

3 Murmuration of starlings: How our stunning front-page photograph was taken