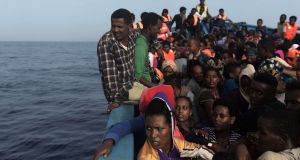 Strategic foresight is an essential requirement of prudent action in a rapidly changing world, yet is all the more difficult due to the very pace of change. This paradox is at the heart of warnings about how foolish is a short-sighted approach to the global buildup in numbers of refugees, asylum speakers and displaced people.

Filippo Grandi, head of the United Nations High Commission on Refugees (UNHCR) says if the richest countries simply close their borders in response they will undermine their capacity to tackle the issue, and their civilisational values in the longer term.

In a perceptive interview with this newspaper Grandi defined this as the “age of egotism” in the richer world, dominated by “me first, we first, our country first” policies and closing minds.

Scapegoating refugees in hate speech, cutting off access and failing to deal with the root causes of displacement and forced movement of people could be copied by the global south where 85 per cent of them actually reside. He warns this response is fundamentally ineffective and will make the problems involved far more difficult, or impossible, to tackle in 50 years time.

A similar closing off of rescue and humanitarian facilities in the Mediterranean by European states and the EU is not only heartless but erodes civilisational and legal values built up over generations.

Recent events such as the bombing of Tajoura refugee detention camp in Tripoli, and the refusal of entry to a rescue ship in Italy, have highlighted this erosion of civility. These issues badly need to be depoliticised, as he points out.

Grandi and his organisation continue to defend more humane values and policies. They call on governments to plan more strategically for settling refugees and remind us of how much the burden of greater instability in countries such as Syria, Colombia, Venezuela, Somalia, Ethiopia or Afghanistan is borne by internal displacement of people and their finding refuge in neighbouring states.

Most of them want to return home; only a small minority travel the longest distances in search of refuge. The much larger question of economic migration should not be confused with the problems faced by refugees and demands different types of policy.

Ireland comes comparatively well out of Grandi’s assessment, though he criticises accommodation policies and the slow handling of refugee applications. He commends decisions to allow refugees to find work and recommends local policies such as community sponsorship of refugee families. Adopting these sort of imaginative approaches now will help social integration in the longer term.

So far this state has avoided the anti-immigrant rhetoric more common elsewhere in Europe. The UNHCR’s valuable and steadfast pursuit of fair treatment for the world’s 26 million refugees, 3.5 million asylum seekers and 41 million internally displaced people deserves continued support by governments. It is all the more important in combatting short-sighted egotism masquerading as good public policy.

1 A vegetarian and a non-drinker visit Ireland: here’s their verdict
2 ‘I get paid to learn. I couldn’t recommend it enough’
3 Leaders’ debate: For one dramatic moment, the Taoiseach is like a rabbit in headlights
4 Election 2020: Parties warned of ‘insane’ election promises as Varadkar offers Martin coalition
5 Miriam Lord: The left woos Mary Lou as FG tries to keep Ireland's nanas and granddads happy
Real news has value SUBSCRIBE