Will female-only professorships make the difference? 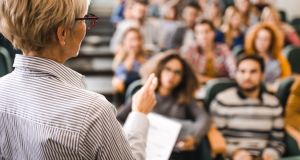 ‘Visibility, role models and mentorship from women at senior levels can have a positive influence and women in senior levels may improve decision making.’ File photograph: Getty

Gender balance in higher education institutions is on the way, but not fast enough. This, in a nutshell, is the argument for female-only professorships. But will they make a difference?

The recent report of the gender equality taskforce concluded that, based on current trends, it could take 20 years to reach a situation were 40 per cent of professors are women.

This is why female-only professorships have been advocated in areas of significant female under-representation, predominantly the fields of science, technology, engineering and mathematics (Stem).

The first of 45 women-only professorships are due to be filled by the end of the year, according to Minister of State for Higher Education Mary Mitchell O’Connor who last month officially opened applications to the what is called the “senior academic leadership initiative”.

It will certainly achieve gender balance faster, but is it the best approach?

Gender disparities set in long before women apply for professorships.They are evident by the time students pick their Leaving Cert subjects, especially within sciences.

At third level, female students choose science degrees, while males opt for engineering and technology degrees – the gender gap is in technology, engineering and mathematics rather than Stem. Subject access is an issue, with boys’ schools more likely to offer these subjects, but even in co-ed schools, gender disparities in subject choices exist.

There are many reasons for these disparities, and these are the focus of ongoing research, but the evidence suggests environment plays a role. Data from the national longitudinal study Growing Up in Ireland show that boys with high maths scores are more likely to be described as “above average” or “excellent” at maths, by their mother and teacher, than girls with the same score.

These results relate to nine-year-olds – long before children have even entered secondary school, let alone third level – and are not replicated for reading scores. The fact that gendered subject choices and stereotypes manifest at such a young age is worrying and requires a policy response that addresses these problems at source.

Research on gender in senior civil service positions suggests that higher proportions of senior female role models is positively associated with women’s perceptions of opportunity for advancement, but the effect is small.

Professors generally do less teaching than lecturers, so the visibility of women to students may best be improved by gender balance at all levels, rather than professor grade. The research also shows that even mild positive discrimination is viewed negatively by men and women alike and so the longer-term impacts for morale of implementing such policies should be considered.

The evaluation of women’s scientific contribution to Stem may shift as a result of this policy. Female academics in a Stem-adjacent field often attend male-dominated conferences and find themselves sitting on panels as the sole woman. They are often left wondering whether their gender partly explains the panel invitation in the first place.

For these new professorships, there will be no speculation. It will be a matter of public record that the professorship in question was created for female applicants. What impact will this have for the professor’s perceived status and scientific contribution, as compared to women who achieve no gender-bound positions?

Other potential unintended consequences include the possibility that women appointed to these roles may be asked to take on extra administrative tasks, diminishing their capacity for research or teaching. In male-dominated fields, women may sit on more boards, serve on more interview panels and co-author more internal reports, in an effort to ensure gender balance. Will women in these roles feel more pressure to take on extra responsibilities?

While this policy will certainly improve gender balance among professors, is it the best way of doing so? Can it address gender disparities in Stem interest, access and participation, which set in at very young ages? Or might this policy have unintended consequences for women in Stem?

Regardless of the merits of the female-only professorship initiative, the evidence clearly highlights the need for concerted efforts from the earliest stages of the education system to foster gender equality in Stem.