Does unionism not have something better to offer?

Susan McKay: Loyalists and their allies in the Orange Order want it every way 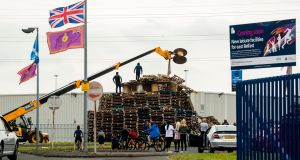 The sash my grandfather wore is in my wardrobe now, along with the bowler hat in which he looked like Stan Laurel of Laurel and Hardy. Heirlooms. I remember his pride as he got ready to head to the Field on the Twelfth his unquestioning belief that being in the Orange Order, and the Black and the Masonic, meant he was a good, upstanding citizen. But I’ve seen Orangeism flagrantly promote sectarian hatred. I’ve seen it welcome loyalist paramilitaries into the “unionist family” while Protestants with open minds and a cross-community outlook are denounced as Lundies.

There is no harm in a traditional 11th night bonfire blazing brightly against a night sky, no harm in a neighbourhood party, no harm in the playing of flutes and drums or dancing in a dress made out of union jack flag. But there is harm in using sectarian gangsters to threaten to kill contractors hired by the local council to enact a democratic decision. There is harm in stirring up old hatreds, hoisting KAT (kill all taigs) flags. There is harm in having such a dearth of political imagination that you think the burning of tyres in an urban area is a human right.

Is it a battle? Is it a street party? Loyalists and their allies in the Orange Order want it every way. A culturally bizarre photograph is circulating showing women and children hugging an unlit bonfire above which a youth in a hoodie holds aloft an Ulster flag with a union jack inset. There is a caption in the kind of old style font seen on postcards from minor holiday resorts. It says, “@ulsterwillfight.” The involvement of the UVF was denied. Photos on social media showed ladies serving minerals to children. After the bonfire got to go ahead, a tweet boasted: “The siege of Avoniel is over. The loyalist people of Ulster stood firm in the face of a nationalist onslaught. A momentous and hugely symbolic victory . . . A humiliation for SF/SDLP/Alliance.”

Translation: the PSNI and Belfast City Council were forced to back off from protecting a community amenity, in order to avoid a potentially violent confrontation with young people stirred up by bigots, even though by doing so they were yielding to threats made by paramilitaries. (And by the way, in 2018 the UVF claimed that is supported the rule of law.)

“They talk of the loud violence their parents knew as if it is a kind of birthright denied to them.” That’s a quote from Jan Carson’s excellent new novel, “The Fire Starters”, set in post-Troubles East Belfast during the marching season. We are, as the poet Derek Mahon recognised, a “fire-loving people.” We are also far too susceptible to the lure of what Mahon called “bleak afflatus.” Has unionism nothing better to offer its young?

1 Coronavirus: Non-essential travel from US set to be banned within days
2 ‘Our hearts are broken’ – implications of fresh lockdown sink in
3 Are we really facing the death of the office?
4 Portlaoise locked down: ‘Our older clientele haven’t been back’
5 Coronavirus: No additional deaths in State but 68 new cases
Real news has value SUBSCRIBE