The French press and the price of proximity

The media enjoys a very close, if not too close, relationship with politicians 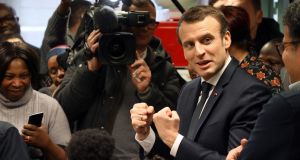 Close up: Emmanuel Macron during a visit to Evry-Courcouronnes, France, this week. He has been one of the most vocal champions recently of greater separation between media and political power. EPA/Ludovic Marin/EPA

Last Monday, officials from the French prosecutor’s office turned up at the offices of Mediapart, an investigative news website based in Paris, and announced they were there to search the premises.

A few weeks before that, Mediapart had published a story about president Emmanuel Macron’s former bodyguard, Alexandre Benalla. The latter has been a household name in France since last summer, when Le Monde published a video showing him beating demonstrators at a May Day protest. The Élysée Palace covered up the incident for weeks and later defended Benalla before being forced to fire him.

The Mediapart story, published on January 31st, was embarrassing for the authorities.

It cited recordings obtained by unnamed sources in which Benalla is heard saying he had stayed in contact with his superiors even after his suspension from the Élysée. In the recordings, Benalla also said one of the president’s closest advisers was helping him as he faced potential inquiries over his conduct.

Explaining the attempted raid on Monday – Mediapart denied the officials access, on the ground that they had no warrant – the prosecutor said it was looking into breach of privacy charges and alleged wire-tapping.

Mediapart believes it was an attempt to trace the sources for the story. (It emerged later in the week that the prime minister’s office had alerted the prosecutor’s office to the Mediapart story, but the same office has strongly denied that it was suggesting the prosecutor investigate.)

The episode generated a bit of fuss in Paris this week, but not as much as you might think. That’s partly because people don’t expect any better from the state.

In 2011, at the height of a funding scandal involving then-president Nicolas Sarkozy’s party and the L’Oréal heiress Liliane Bettencourt, the French secret service obtained the phone records of the Le Monde reporter Gérard Davet after he published a story that embarrassed the government.

A senior official in the justice ministry, who the intelligence service suspected as the source of Davet’s information, was swiftly transferred to a new post in French Guiana. Around the same time, intruders broke into Davet’s apartment and took only two items: his laptop and a GPS device.

Mediapart, a feisty outlet founded by former Le Monde editor Edwy Plenel, also broke some big stories on the Bettencourt scandal. It had laptops and tapes taken from its office around the same time, while its reporter on the story, Fabrice Lhomme, had a laptop stolen from his home.

This sort of thing has longer antecedents: in the 1980s, then president François Mitterrand ordered the secret services to tap journalists’ phones to make sure the story of his secret daughter didn’t get out.

The ease with which the authorities feel they can violate journalistic protections is a reflection of the immense powers French presidents and senior government figures wield, and the unhealthy proximity between politicians and the security services.

But it also reveals a paradox: the French political-security apparatus is quite happy to betray journalists, a group with whom it generally enjoys a very close relationship.

Being in bed with power is not a metaphor for French journalism; lots of ministers past and present have been married to reporters and TV anchors.

In every democracy, politicians and the press have a symbiotic relationship, but the French media’s fixation on national politics (nearly everything else is relegated to the status of faits divers, a virtually untranslatable human-interest category whose only function is to divert us from what really matters: politics) makes the dependency worse.

Added to the mix is an ownership problem: major French outlets are controlled by billionaires who are close to politicians, because the embrace between big business and politics in Paris is even tighter than that between journalists and the politicians they cover.

I sense some of this is changing – Mediapart is in the vanguard of a more robust style of coverage, and one that relies less on proximity to power. It’s striking that one of the most vocal champions of greater separation recently has been none other than Macron himself.

“The proximity we were used to wasn’t good either for political powers or for the practice of journalism,” he said last month. That’s partly self-serving: Macron has been giving fewer interviews, and subjecting himself to less press scrutiny, than his recent predecessors did.

He has recently tried to move the presidential press corps out of its office in the Élysée, a decision taken on the dubious grounds that his staff needed more space.

That drew justified criticism from journalists and press rights groups. But physical proximity is one thing; what the French press really needs is a bit more distance from its subjects.