The Irish Times view on Trump vs his government

US security threats: President pursues positions that the best minds in his administration clearly oppose 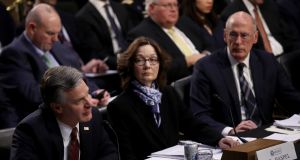 In the early stages of the Trump presidency, as US allies struggled to adjust to the new froideur, cool heads in Washington offered reassurance by saying: ignore the rhetoric, watch the policy. Trump might rant and rave, in other words, but the structures of government would act as a brake on his excesses, steering US policy carefully through the coming storm.

More than two years into the presidency, however, it’s clear that that was wildly optimistic. It’s true that Trump has been constrained in some respects by Congress and the courts – the renewal of Russian sanctions and the withholding of funds for his border wall are two important examples – but in key areas the powers of the presidency have allowed Trump to pursue positions that the best minds in his administration clearly oppose.

That’s particularly true in foreign policy, where the president enjoys considerable latitude and where relatively mainstream republican figures have been edged out. Yet the underlying fact – that Trump and his administration have radically different views on what’s going on in the world – has never been clearer.

At a Senate committee hearing last week, US intelligence leaders flatly contradicted Trump’s views on nearly all the key threats facing the country. They believe withdrawing troops from Syria and Afghanistan was a mistake. They think Islamic State remains capable of launching attacks. They see Russia as a threat and Nato as an important alliance. They see no evidence that North Korea is planning to give up its nuclear arsenal and believe Iran is complying with the terms of the nuclear deal which the US has repudiated.

Trump responded by remarking that his own intelligence leaders were “naive”. The naive ones are those who believed Trump’s wilder impulses could be contained. As his policies on North Korea, Iran, Syria and Afghanistan show, his shallow, ill-informed judgments are determining policy on some of the key international questions of the day. What the intelligence figures did not say, but must surely believe, is that that is one of the biggest threats the US faces today.

1 Coronavirus: Contact tracing to be extended to suspected cases in effort to combat Covid-19
2 Tony Holohan admitted to hospital after feeling unwell during coronavirus briefing
3 ‘On the bike I meet no one’: 78-year-old cyclist refuses to cocoon
4 Coronavirus in Ireland: New powers of arrest for gardaí expected to come into force
5 Netflix: 10 of the best new shows and films to watch in April
Real news has value SUBSCRIBE