Society has a duty to protect the most vulnerable among us

Voices from the Citizens’ Assembly: Ethical responsibilities put a limit on our autonomy 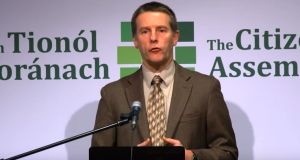 Dr. Dónal O’Mathúna: “In moving away from one end of the spectrum, we must avoid swinging to the other extreme.” Photograph: Citizens Assembly

The principle of autonomy has become widely respected, especially in healthcare. In general, this is good.

I’m glad we are putting behind us the days of clergy running people’s lives, husbands making all the decisions for their wives, or doctors telling patients what to do.

But in moving away from one end of the spectrum, we must avoid swinging to the other extreme.

Self-rule is what the Greek behind ‘autonomy’ literally means. “It’s my body, and I decide what happens to it.”

When applied to abortion, this supports freedom of choice. If a woman finds herself pregnant, and does not want a baby, this ‘self-rule autonomy’ declares she should be free from interference and have no limitations on her choice.

That misses what ethics is all about: making decisions that are right and good. Self-rule autonomy only tells us who should make the decision, not whether the decision is ethical. In many areas of life our autonomy is limited: we cannot and should not do everything we want. Choices about the unborn should be no different.

The approach I advocate is called ‘relational autonomy.’ This holds that people should make important decisions about their lives, but we should consider the impact of those decisions on those around us. Relationships bring ethical responsibilities which can put limits on autonomy.

Abortions involve a pregnant woman, but other relationships are involved. A woman may not want to give birth for many reasons, some highly complicated, some tragic, some less weighty - most relational. All these situations are difficult, and lead to decisions that cannot be made lightly. But pulling out autonomy as an ethical trump card, does not address the deeper issues.

Even when the life of the woman is threatened by pregnancy, it’s not just about autonomy. I believe it is ethical to save one life when two cannot live. Two lives can be intimately related and in conflict with one another.

If only one can live, the autonomy of each and the good of each can give ethical justification for saving only one of the lives. Relational autonomy better expresses the pain of this tragic situation, rather than claiming it is about freedom of choice.

One way to decide when autonomy clashes with other ethical principles involves the so-called harm principle: that people have the freedom to do what they want, so long as they do not harm others. This is precisely where the freedom of choice argument breaks down in abortion. There is always an ‘other’ where abortion is concerned. And by definition, that other ends up dead. Whatever opportunities, or potential opportunities, the unborn might have, they are terminated totally.

The unborn are one group of humans least able to express autonomy. Yet if given the opportunity, they, with the same uncertainties we experience, can become autonomous and live their lives. Society has a duty to protect the most vulnerable among us, including the unborn.

Relational autonomy goes beyond the right to choose; it includes the responsibility to choose rightly. If we get into bed with someone, we take on certain responsibilities whether we acknowledge them or not. Intended or unintended, a pregnancy may result.

This is partly why becoming sexually active is such a momentous decision, with most societies urging that it be reserved until a committed, permanent relationship exists to welcome a child into society.

This aspect obviously doesn’t apply in rape situations. If a woman had no choice in becoming pregnant, how should she be responsible for the unborn? Rape is abhorrent, and my heart goes out to anyone who has been raped.

But at the same time, the unborn had nothing to do with the harm inflicted. Why should they be the ones to have their chance at life terminated? If allowing the unborn to grow and experience life is the right thing in other situations, it does not matter how the pregnancy came to be. Certainly, after rape, this would be very difficult, heroic in many ways.

Taking away the life of the innocent because of a man’s crime will not relieve the pain or bring justice. Allowing life to come from a heinous crime can let some good come from something bad.

Moving away from rape situations, the unborn come to be because of a relationship. Those relationships bring responsibilities, for the father and the mother. Both are autonomous. Both have choices.

And in the middle is a new, vulnerable being, entirely dependent on the choices others make. They can exercise self-rule autonomy and end that life.

Or they can choose to promote the good of that life, helping one another in a difficult situation and giving the unborn a chance of becoming autonomous.

The length of that life, how able it is, or how it got started, makes no difference ethically. The ethical decision involves helping those in need when they depend on us.

Irish families sometimes failed to live up to this, but also made difficult choices to parent unplanned children, or grandchildren, or open their arms to women and babies in need.

Building a society like this is not easy, but it is worth it.

Dr. Dónal O’Mathúna is Associate Professor of Ethics at Dublin City University. This is an edited version of his address to the Citizens’ Assembly.