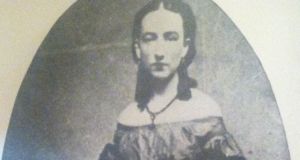 Today millions of Americans can take pride in Irish heritage, all the more so if it was impoverished. But there was a time when such roots were less fashionable than now and when the memories they carried were too close for comfort. In this, it seems, lies the explanation for the “magnificent hoax” perpetrated by a woman known for most of her life as Ida Mayfield Wood.

If her story had ever been made into a film – and it’s extraordinary that it hasn’t – it could have had similarities with Citizen Kane, released a few years after her death.  Instead of “rosebud”, the mystery word in her case would have been “Mayfield”, a surname she attributed to aristocratic origins in Louisiana, where her mother was said to be descended from Scottish earls and her father supposedly owned a sugar plantation.

But in most respects, her tale is like no other. In its glory years – the 1860s – she was rich, beautiful, and famous, at least in New York, where her husband Ben Wood owned the city’s best-selling newspaper and her brother-in-law Fernando was the (spectacularly corrupt) city mayor.

Through these connections, she once met President Lincoln, and when Britain’s Prince of Wales paid a visit, she not only met him too, but danced with him at the official ball, a distinction New York’s socialites had vied for as Roald Dahl’s children vied for tickets to Willy Wonka’s chocolate factory.

Half a century later, however, by then widowed and the former owner of the Daily News, which she had also edited for a time, she had become reliant for comfort on her wealth alone. So when the collapse of the Knickerbocker Trust sparked the great “Panic of 1907”, Ida took drastic measures.

First she went to the bank and demanded all her savings in cash. Since this was a huge sum, the manager was reluctant to part with it. That was until she threatened to tell every newspaper in the city that the bank was unable to honour its debts. It quickly found the money.

For a while, it seems, she enjoyed spending it, travelling in Europe with her sister Mary and daughter Emma. But soon afterwards, all three moved into a suite in New York’s Herald Square Hotel. So doing, Ida disappeared from public life.

She only emerged from obscurity, unwittingly, one day in 1932, when calling for a doctor to attend her sister, critically ill. Both women were in their 90s now and had been all-but-forgotten even in the hotel, where they had refused entry to the chambermaids for many years, ordering in food and exchanging linen, when necessary, through a barely-opened door.

After her daughter had needed to go to hospital some years before, and died there, Ida had not attended the funeral. Now her sister’s time had come – she was already dead when the doctor arrived – and her requiem was to be similarly ignored.

Ida must have hoped to go the same way herself in time.  She and the old hotel were well matched. They were both relics of a glamorous past and as one commentator put it, were now “dying together”. Unfortunately, with medical personnel, undertakers, and lawyers descending in the wake of Mary’s death, the secret was out. From there on, there was no chance Ida could go quietly.

The many who now came and went through her suite found the classic tableau of the rich recluse. Rooms were piled high with the detritus of decades, from unopened tins of milk to old newspapers, clothes, and documentation. But there was also money – a million dollars in cash – and expensive jewellery. If her own accounts were to be believed, there was another million hidden somewhere: she just couldn’t remember where.

Journalists now joined the interested parties converging on the suite, which was placed under 24-hour guard. And proving the adage that where there’s a will there are relatives, large numbers of people claiming a family relationship began to emerge.

By the end of the subsequent epic legal case, there were 1,103 potential heirs. Two separate Wood factions made the early running. These were joined later by an army of Mayfields, up from the old south to confirm Ida’s origins there.

But the Louisiana backstory of the “Recluse of Herald Square” turned out to be entirely fictional, like her maiden surname. Investigators gradually discovered that before marrying Wood – a story in itself – Ida Mayfield had been Ellen Walsh, that her American life had begun in Boston, humbly, and that for some of her heirs, they would need to visit Dublin. About which, more tomorrow.

1 Child (4) died of viral infection following nap at Cork creche
2 Miriam Lord: Does anyone care if Leo smoked or snorted?
3 A vegetarian and a non-drinker visit Ireland: here’s their verdict
4 The Turning: This film is a total waste of time. Don’t even read the review
5 Man tested for symptoms linked to coronavirus in Belfast
Real news has value SUBSCRIBE