Tips include: Goodbye negative campaigning, and beware the Eighth Amendment 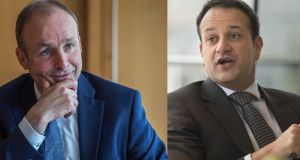 Micheál Martin and Leo Vardkar: Sorry, chaps, it’s not all about who’s in charge

The dust might not have settled but the data is in. Thanks to research conducted by various pollsters, we have a pretty good idea of what happened and why in last June’s UK general election. And there are some relevant and thought-provoking take-homes for both Fine Gael and Fianna Fáil.

1 First the good news. The combined share for the Conservatives and Labour was just over 80 per cent. So, as polls suggest might be the case in Ireland, too, perhaps the conventional wisdom that the two biggest parties are somehow bound to bleed votes to smaller, more radical alternatives no longer holds.

2 A note of caution for both Fine Gael and Fianna Fáil. If voters don’t see the need for an election, they do not take kindly to whichever party is seen to have opportunistically triggered it for its own advantage – whether it’s an opposition suddenly pulling the plug on government or, as was the case with the Conservatives, a government transparently trying to capitalise on an opinion poll lead over the opposition.

3 Widespread scepticism about whether campaigns make much of a difference may need to be revised. Labour started way behind the Tories yet came close to finishing level on vote – if not on seat share. Surveys show voters are less and less tribal and more and more consumerist. Surveys also show that more and more of them are making up their minds later and later, so losing momentum can be very costly.

4 A word of warning to Fine Gael. Don’t, as the Tories did, try to make the campaign all about who’s in charge. You might, like they did, find that your leader doesn’t do as well against that opponent as you’re expecting, especially if he’s an experienced electioneer. And research on this year’s UK general election confirms what we already know, namely that voters aren’t stupid and they’re suspicious: are you focusing on your leader because that’s all you’ve got to offer or, worse, because you’ve got something to hide?

5 Voters may be be tiring of negative campaigning. They’re feeling pretty negative themselves, with a majority in the UK, for instance, worried that kids today aren’t going to enjoy a life as good as their parents’. Obviously, they don’t all want pie-in-the-sky promises from the opposition, and Labour’s platform was regarded by too many people as too good to be true. But at least it was positive and hopeful, in marked contrast to the “misery manifesto” and personalised attacks put out by the Conservatives.

6 Despite its best efforts, the government doesn’t get to decide what the election is going to be about. The Tories assumed they could make it all about competence and Brexit. But the voters wanted it to be about the bread and butter issues that mattered most to them and their families rather than some abstract idea of what was best for the country. That suited Labour, as it was seen to be keen to talk about precisely those issues and to have the best policies on them. If the Irish are anything like the British, then, Fianna Fáil is right to shout as loudly as it can about the need to move beyond austerity, the shortage of affordable housing, and (most importantly, surveys show) the crisis in healthcare.

7 What you’re willing to talk about speaks volumes about your brand, and brands still count. One reason the UK general election didn’t turn into a total disaster for Theresa May was partly because the Conservatives were slightly ahead of Labour on “Competent and capable” and way ahead on “Willing to take tough decisions for the long term”. But that was it. Labour had huge leads on “Wants to help ordinary people get on in life” and “Fairness” and “Opportunity for all”. Judging from their ardfheis slogans and soundbites, Fianna Fáil seem to have taken note.

8 That ardfheis was also a reminder of a lesson that emerges from research on this year’s general election in the UK, namely that enthusiastic foot soldiers matter. Work for the Party Members’ Project I run makes it clear that not only did Labour’s grassroots outnumber their Conservative counterparts by a factor of five to one, most of them did more campaigning, too.

9 Crucially, Labour’s members also did a lot more for their party on social media. Facebook (and to a lesser extent Twitter) really are crucial campaign spaces nowadays. Clearly, both Fine Gael and Fianna Fáil need to make sure they aren’t (like the Tories were) behind the curve here. But they also need to appreciate that the most effective memes and clips – and research suggests that positive and genuinely witty stuff works far better than negative, fact-based material – weren’t produced by Labour HQ but organically by the party’s younger supporters on the ground.

10 The final lesson follows from this, but it’s a tricky one. We know from all the research that age was a major factor in June, largely because younger voters have a more liberal, more progressive outlook on a whole range of issues. We also know that the referendum that took place the year before helped (re)structure people’s political preferences.

Fine Gael and, perhaps particularly, Fianna Fáil, which needs to do better in bigger places, need to take note. Although by no means all young Irish people want to see the end of the Eighth Amendment, and although there is a huge issue of conscience at stake, neither party wants to get trapped on the wrong side of what in Ireland, too, may be becoming an increasingly crucial demographic divide. There will always be a place for a party that represents small-town, small-c conservative Ireland. But that place may not be the future.

1 Normal People Class of 2020: The nine college friends in the series
2 We need to pay very close attention to what is happening in Britain now
3 Connell losing touch with club championship is real tragedy of Normal People
4 Seven great Irish escapes to rent when lockdown lifts
5 Protestors clash with police in Atlanta as demonstrations erupt for second night
Real news has value SUBSCRIBE