Technology and globalisation add to people’s feeling of insecurity

‘Globalisation has also reduced financial disclosure, blurring our knowledge of ownership and control of business’ 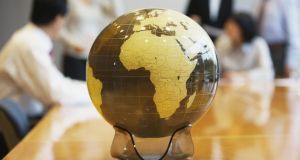 ‘Globalisation and technology have been key drivers in the three decade (a generation) decline in national income for workers and self-employed and its corresponding shift to wealthy people and corporations.’ Photograph: Getty Images

People are insecure. Young people worry about getting a decent job, about finding a secure home and about having to pay off the vast debts run up in the decade of liberal economic policies of Fianna Fáil/PD/Green governments to 2007. Older people worry about their security in old age, access to decent healthcare, about their children getting jobs or being forced to emigrate.

A recent study by the Eurofound agency concluded that 14 per cent of jobs in Europe are high-paid good jobs; 37 per cent are well-balanced good jobs; 29 per cent are poorly balanced jobs; and 20 per cent are poor quality jobs. Thus almost half of all those at work are not in good jobs. Yet we have never had such high incomes or wealth. This is in spite of the six years of the Great Recession. National income is three and a half times what it was a generation ago. Yet only a generation ago, jobs and pensions were more secure, homes were easier to find and healthcare was not such a big worry.

What has led to today’s insecurity? The big drivers of insecurity are globalisation and technology. They have shifted low skilled jobs and now even middle income jobs offshore, created intense competition, change and uncertainty. They give great power to large corporations, while undermining the power of states and of organised labour. Importantly, they have also changed the nature of politics.

Globalisation and technology have been key drivers in the three decade (a generation) decline in national income for workers and self-employed and its corresponding shift to wealthy people and corporations. In Ireland during the boom all incomes rose so the seismic shift in income was not evident, but thanks to the Great Recession, it is now apparent.

Globalisation has also reduced financial disclosure, blurring our knowledge of ownership and control of business. It has led to the privatisation of swathes of public services, and privatised public services are increasingly run by big, non-competing oligopolies. It has facilitated increased tax evasion and tax avoidance on unprecedented scales by the wealthy and by large companies.

There has been a decline in job security, with the growth in precarious employment hitting the young and older people hardest. Increasingly, workers are hired as self-employed within firms which seek to minimise permanent staff because of intense competition. It seems jobs will be precarious and poorly paid for many except the most educated. But even professionals are forced to work endless hours, always on call by phone and while free to set their own hours, they fear to take that “choice”.

Globalisation is hard to tame. But it has brought huge benefits from trade including much cheaper goods – the price of clothing in Ireland has fallen by 55 per cent since 1995 (whereas overall prices rose by 50 per cent) and the variety and quality of goods and services has improved immeasurably.

Ireland, one of the most globalised economies in the world, has particularly benefited from foreign investment which has helped bring much of the economy up to world standards in productivity, with well-paid, high-skilled jobs and substantial benefits for the rest of the economy.

Thus we do not want to stop globalisation. We do, however, want to control it and thus to make it work better for citizens, to get immensely profitable firms to pay taxes again and reduce the power of finance.

The control of technology is difficult because it is firmly in the hands of big business. It pretends to be cool, to dress down, to “do no evil” but in many ways it is libertarian, tax-avoiding, and obsessively controlling. The big tech firms have increasingly privatised privacy.

Many multinational firms can be powerhouses of innovation, employment and of wealth creation. We need governments to tame them, to tax them and to use the tax to pay for healthcare and to make jobs decent and secure so that we ourselves can again pay for our pensions.

While recognising that such huge firms are a part of the economy, it seems governments here and abroad go to inordinate lengths to court them at any cost. This includes engaging in tax wars.

Perhaps the worst example of craven sovereign subjection to big business was, when prime minister of Luxembourg, Jean-Claude Juncker’s abject grovelling before Amazon to persuade it to set up key tax-avoiding subsidiaries there. He is now President of the EU Commission.

Vigorously pursued, these actions on evasion and avoidance and tax havens could lead to greater security for us all by helping to fund health, welfare, education and pensions.

Populist politics will not solve this dilemma of growing insecurity in the midst of much progress and plenty. It will take hard analysis of what is going wrong to address it.

The national discourse of “better public services and lower taxes” must end. To address the seismic shift in power that globalisation and technology has given to the few, there has to be an equal radical shift in politics. We need governments which seek to redress the power imbalance, not exacerbate it with tax wars, tax avoidance schemes, further deregulation, outsourcing and privatisation.

1 L’Ecrivain, Derry Clarke’s Michelin-starred Dublin restaurant, to close after 31 years
2 Liverpool’s Klopp responds to Donegal schoolboy who asks him to stop winning
3 McDonald expected to get highest number of votes but no taoiseach to be elected
4 Seán Ó Fearghaíl re-elected as Ceann Comhairle of the Dáil
5 Trump adviser Roger Stone sentenced to three years, four months in prison
Real news has value SUBSCRIBE