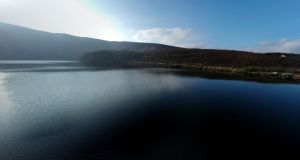 One of Oliver St John Gogarty’s favourite places for a summer outing was Lough Bray, Co Wicklow, in the mountains just beyond the border of Co Dublin. At the lakeside, food and wines would be laid out and he and a coterie of friends would recline on the grassy sward, as good conversation flowed, songs were sung and poetry recited.

One day in September 1915, when their picnic was abandoned because of inclement weather, they repaired to McGuirk’s teahouse, a little cottage close to the lake. Mrs McGuirk kept a visitors’ book, which everyone in the party dutifully signed.

Recently, I was delighted to find in that book the signatures of Gogarty’s party, happy in the moment and in good company, all those years ago.

Margaret, Gogarty’s wife, signed herself as Neenie Gogarty, and gave her address as 17 Earlsfort Terrace, which Gogarty referred to in his writings as “a kind of flophouse”.

Eleanor Duane, Margaret’s sister, who lived with Margaret and Oliver, was another signatory.

Kathleen Fox signed her name in large, clear script. Born in Co Dublin in 1880, she studied drawing and painting under the artist William Orpen. Later she worked in metal, enamels and stained glass, an artform in which few women were involved at that time, and she won a number of prestigious awards. After continuing her studies in Paris and Bruges, she returned to Dublin, and in 1916 was in the thick of the Rebellion, sketching and painting and becoming known as the “Artist of the Rising”.

One of the fine works she produced then is a large canvas depicting the surrender of Countess Markievicz and Michael Mallin at St Stephen’s Green, which is now in the Sligo County Library and Museum.

After a painting sojourn in Nice, she returned to Dublin in the early 1920s and worked as a portrait painter.

Ruth Lane-Poole signed in tiny letters, giving her address as Greystones, Co Wicklow. Born in Limerick in 1885, she was a cousin of the Yeats family and was involved in the Irish arts and crafts movement. She was married to an Englishman, and moved with him to Australia in 1925, where she established herself as a reputable interior designer. One of her commissions was the design of the furniture and interiors of Government House and the Prime Minister’s Lodge in Canberra. She lived a long and productive life, and died in 1974.

Joseph Maunsel Hone signed with a spidery hand. He was related to Nathaniel Hone, the painter, and Evie Hone, the stained-glass artist, and was a major figure in the Irish literary world at the time and a founder of the publishing house Maunsels.

An accomplished linguist, he translated several major works into English, and wrote important biographies of George Moore, Bishop Berkeley and William Butler Yeats, who was a friend.

The lively conversation of this interesting group, over their steaming cups of tea and home-made cake, is not recorded

The sloping hand of Vera, his wife, is also there. They lived next door to William Orpen in Killiney, and she modelled for the artist. She was quite a beauty, and was the subject of his some of his finest portraits. Born Vera Brewster in New York, she had appeared in the chorus line of a number of Broadway productions before she married Hone.

The oldest member of the party was William Bailey (56). A barrister and an enthusiastic supporter of the co-operative movement, he was a well-known figure in Dublin cultural life, a patron of the Abbey Theatre and a governor of the National Gallery.

Gogarty did not sign his name on this occasion, and Mary Murphy I could not identify.

The lively conversation of this interesting group, over their steaming cups of tea and home-made cake, is not recorded, but if you read chapter 25 of Gogarty’s As I Was Going Down Sackville Street, you will get a good idea of how it might have flowed.

I wonder, however, did their teahouse hostess, Mrs McGuirk, allow singing on her premises?