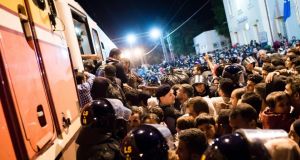 Refugees trying to board a train at the border between Serbia and Croatia near the city of Tovarnik, Croatia, on September 17th. Photograph: EPA/GREGOR FISCHER

Earlier this week the UN’s High Commissioner for Refugees addressed the European Parliament in Brussels. Criticising the EU’s lack of unity on the refugee crisis, Antonio Guterres recalled the Hungarian refugee crisis that followed the 1956 uprising.

Guterres’ comments are as disheartening as they are accurate. The European Union, which was built on a shared vision of freedom, tolerance and open borders in the wake of the second World War, is now bitterly divided as member states, entangled in the dysfunctional web of EU asylum law, blame each other for the handling of the migration crisis.

Hungary, who citizens were once the beneficiaries of asylum across Europe, has shut its borders, resorting to tear gas, water cannons and violence to defer asylum seekers.

Triggered by Germany’s decision to impose border control on its southern borders, country after country has shuttered up its frontiers across the bloc, leaving bottlenecks to build up at key entry points, with thousands of migrants now amassing at the EU’s external border between Hungary and Serbia.

Croatia and Romania – EU states that are not part of the Schengen free-movement zone – are now becoming the entry points of choice into Europe, highlighting yet more confusion within the EU’s migration system as the mismatch between Schengen and non-Schengen states comes into focus.

Having failed to reach agreement on a common approach last Monday, EU justice ministers will again tackle the issue at a meeting in Brussels on Tuesday, with an EU summit scheduled the following day.

It will be no easy task. Even by EU standards, the lack of progress last Monday was deeply worrying and indicates the scale of the challenge faced by ministers next week.

The EU is deeply divided on how to respond to the migration crisis. The lack of a common EU immigration system has prompted member states to adopt their own, short-term solutions, tailored to the demands and preferences of their own country, without recognising the impact this might have on neighbouring countries that share a common travel area.

In Germany’s case this meant signalling it would welcome 800,000 Syrian refugees and suspending the Dublin convention by accepting migrants who had not registered in the first EU country of arrival, only to impose border controls a few days later.

In Hungary’s case it involved closing its external borders and pushing the problem on to neighbouring states.

The debate over the migration crisis has also exposed deep-seated divisions about the relationship between national sovereignty and shared responsibility that lie at the heart of the EU.

Hungary and others have argued that the will of Germany and other countries should not be imposed on smaller member states which do not share their view on immigration.

Even Poland, which has softened its stance in recent weeks, will “accept as many [refugees] as we can afford: not one more, nor less”, according to prime minister Ewa Kopacz, and its offer to accept 2,000 refugees is far below that which the commission has demanded.

Berlin’s decision to suspend the Dublin convention without consultation with other EU states and the suggestion by interior minister Thomas de Maiziere that structural funds should be withdrawn from countries which do not support the mandatory relocation plan has galvanised the opposition of eastern European states.

While technically the European Council has the numbers to push through legislation next week through a qualified majority, in effect overriding the opposition of central and eastern European member states, it is reluctant to do so.

As an institution that prefers doing things through consensus, it is unwilling to impose a system on a group of states which are vehemently opposed to it.

What appears more likely is that the council will row back on the idea of a mandatory quota system as proposed in the Juncker plan. This would be a huge setback for an EU-wide asylum policy.

Evidently the EU’s migration problems will not be solved alone by a scheme to relocate 120,000 migrants. An overhaul of the Dublin regulation, a strengthening of resources for Frontex, a better system for registering asylum applications and efforts to tackle the root causes of migration are all necessary.

But the quota system would be a first step, and would set an important precedent in establishing the principle of burden-sharing throughout the EU.

Those who are opposed to such a system, and argue that immigration is the preserve of individual member states, are in denial about the geographical and political realities of the EU’s open borders system.

Even countries like Ireland who are not in Shengen benefit from EU free movement rules. In this sense there are parallels to the US system – just as the constituent states of the US are unable to impose their own immigration policy on a state-by-state basis as they share an external border. Schengen members effectively lost control of their internal borders when they signed up to the free-travel area and adopted a common external border.

It is an uncomfortable reality for many but the EU’s free movement rules have consequences as well as benefits.

Whatever the outcome of next week’s meetings in Brussels, the long-term challenge of migration will not be solved soon. But accepting that the shared internal borders of the EU necessitate a collective immigration strategy is a crucial first step.