Supreme Court has given us a clear choice in abortion referendum

Do we want politicians to be able to legislate for abortion on demand? 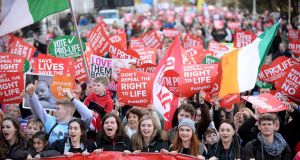 Marchers in Dublin campaigning for the Eighth Amendment of the Constitution to be retained. Photograph: Caroline Quinn/PA Wire

We now know the wording of the referendum proposal and the shape of the legislation that the Government would introduce if the Eighth Amendment is repealed. We can also assess the implications in the light of the Supreme Court decision last Wednesday.

It is bad enough that we pass over to politicians this function. Politics, perhaps necessarily, can be an ugly business. Deals have to be done, compromises made. Small parties, with strong agendas, can exert an influence well beyond their numbers. In the context of abortion, this is likely to push legislation further in a direction of removing any limits.

But matters are actually somewhat worse than this. Under the model of repeal that is proposed to be adopted, the courts would still have a role. The Supreme Court judgment has made it quite implausible to argue that babies before birth would have any continuing effective protection if the Eighth Amendment were repealed.

On the contrary, advocates for abortion on demand would argue that the mother’s rights to privacy and autonomy require that legislation accommodate abortion of unborn children, who would no longer have any constitutionally protected rights, their right to life having gone with the repeal.

Where one party has a panoply of constitutionally-protected rights and the other party has no rights at all, it will be argued that the legislature must give full effect to the rights of the rights-holder.

We already know what resulted in the United States from the supreme court’s embrace of the right to privacy in the decision of Roe versus Wade. The same pattern has emerged in other countries around the world.

This means that our politicians’ hands would actually be tied to some degree in a way that severely damages the lives of unborn babies.

The Oireachtas would be free to introduce legislation providing for wide-ranging abortion, with few or no restrictions. But there is a real prospect that they would not be free to have a law that afforded effective protection to unborn babies as this could be trumped by arguments based on rights of privacy and autonomy.

It is true that certain constitutional principles would make a court reluctant to strike down legislation. There is a presumption that legislation is consistent with the Constitution, and a specific authorisation in the Constitution for legislative regulation by the Oireachtas, as the Government proposes, would command a significant degree of deference from the courts.

Moreover, as Chief Justice Clarke observed in the recent Supreme Court judgment, “the State is entitled to take account of the respect which is due to human life as a factor which may be taken into account as an aspect of the common good in legislating”.

There are, however, limits to these considerations, and in a contest of rights between a rights-holder and the holder of no rights at all the balance seems tilted only one way.

We also have to keep in mind the wider picture. At present the European Court of Human Rights has taken the position that the existence of the Eighth Amendment, which evidences a desire on the part of Irish society to protect unborn babies, is a reason why arguments for access to wide-ranging abortion under the European Convention based on the right to privacy should not succeed. If we take away that protection these arguments before the European Court of Human Rights will be far more likely to prevail, resulting in further pressure for extension of abortion law.

The protection afforded by the Maastricht Protocol of 1992 and the guarantees of 2009 in relation to the Lisbon Treaty would also no longer apply to unborn babies as they are inextricably linked to article 40.3.3. If that provision is repealed, this protection goes with it.

Reflect for a moment on the type of legislation that the Government has in mind if we remove the present constitutional protection for unborn babies. It is abortion on demand, overtly so until the baby is 12 weeks old and in practice for the remaining weeks of pregnancy up to birth: policy 9 of the Government’s policy paper.

Abortion on mental health grounds has proved to be abortion on demand in England, where one in five babies is aborted. Everybody knows that the requirement for signatures of doctors is no effective barrier to abortion on demand. This is not to impugn the good faith of the medical profession, but rather to acknowledge simple factual reality.

In Britain’s Abortion Act 1967, abortion for mental or physical health is based on ground C. The Department of Health Abortion Statistics, England and Wales: 2015, paragraphs 2.14-2.15 records that “in 2015, the vast majority (98 per cent; 181,231) of abortions were undertaken under ground C…..The vast majority (99.95 per cent) of ground C only terminations were reported as being performed because of a risk to the woman’s mental health.”

The Supreme Court has done our society a service in making the position that faces us in the forthcoming referendum clear. We can choose to retain the Eighth Amendment, under which doctors in Irish hospitals protect the lives of both their patients, mother and baby, to a standard of care that is among the safest in the world; or we can repeal the amendment and face the prospect of our politicians introducing laws providing for abortion on demand.

1 Son putting elderly dad under pressure to sign over land
2 Miriam Lord: Unity and common purpose in spades but not for Covid fight
3 Alison Curtis: My guilt at not going for a second pregnancy
4 Stir-crazy Dutch holidaymakers set to descend on Caribbean island
5 Covid-19: Museums, cinemas set to reopen next week as Varadkar warns of New Year restrictions
Real news has value SUBSCRIBE