Stephen Collins: Politicians and people’s restraint saved us from a Greek scenario 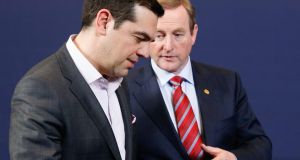 The reckless and chaotic way the Syriza government is risking the future of the Greek people in a game of political poker it can’t win throws a favourable light on the behaviour of mainstream Irish politicians since the onset of the financial crisis.

A little over five years ago both countries were in a similar position, unable to borrow on the international markets and forced to go cap in hand to the European Union and International Monetary Fund for the funds required to keep their societies functioning.

Back then a range of economists, pundits and radical politicians denounced the Fianna Fáil-Green government, and subsequently their Fine Gael-Labour successors, for accepting the constraints of the EU-IMF programme and all of the difficult reforms that it entailed.

Instead it was argued the country could escape from its shackles by adopting an aggressive approach to our EU partners, rejecting the terms of the bailout and defaulting on our debts.

Well, now we know where that would have left us. Look at Greece with its economy already close to ruin, its banks running out of money, its people queuing up at cash machines to extract a maximum of €60 at a time. And that is only in the first week of default. What will happen in the weeks and months to come, particularly if the Greek people vote No on Sunday, is too awful to contemplate.

By contrast in Ireland, after a tough five years the economy is growing more strongly than any other EU state while unemployment is now below the EU average. There is simply no comparison between the prospects facing the people of the two countries.

Of course, Fianna Fáil-led governments presided over a reckless boom that paved the way to the crash but they devised a politically courageous response that best served the long-term interests of the country, despite obvious electoral damage it was going to do to the party.

Fine Gael and Labour followed suit, even though Labour is now facing the prospect of a wipeout for its troubles. Saving the State from ruin was particularly important for the most vulnerable in society and that was a key factor in the party’s approach to Government during the crisis.

Yet the casual denigration of Irish politics and politicians has become such a pervasive feature of political discourse that, not only are the mainstream parties struggling to get any credit for their actions, they are widely denounced for not supporting Syriza’s juvenile behaviour.

In this version of reality the EU is responsible for the appalling plight of the Greek people rather than its own government. Enda Kenny and Michael Noonan are portrayed as part of an EU elite being cruel to Greece when in fact all of the EU institutions have bent over backwards to accommodate Syriza.

EU Commission president Jean Claude Juncker gave chapter and verse at a press conference last Monday night in which he detailed how his attempts to help Greece had been consistently misrepresented by the country’s prime minister Alexis Tsipras and his finance minister Yanis Varoufakis.

The root cause of Greece’s problems goes back much further than the arrival of Syriza in power at the start of the year. Decades of corruption, mismanagement and fraudulent accounts led to the country’s inability to borrow on international markets. The EU-IMF bailout enabled the state to continue functioning, just as it did here, and resulted in far less austerity than would have been the case if borrowing had suddenly been cut off.

The tragedy is that a lot was achieved during the bailouts and many necessary reforms were adopted, even if some were not. By the end of last year the budget deficit had been reduced to manageable proportions and growth had begun.

Then Syriza came to power and all of the hard-won progress was thrown away as it sought to reverse spending cuts and tax increases along with economic reforms while simultaneously looking for another huge debt write-down.

In fact Greece has already benefited from debt restructuring. While its debt is a massive 175 per cent of GDP, the interest payments on it are lighter than those being paid by Ireland, Portugal and Spain.

The country’s creditors, mainly its EU partners, have made it clear that further debt relief will be on offer once Greece implements a genuine reform programme that will give it the prospect of being able to repay at least some of its loans. That was not acceptable to Syriza which is insisting on a blank cheque.

What will happen after the referendum is anybody’s guess. The Dutch head of the Eurogroup, Jeroen Dijsselbloem, has said that help will be available if there is a Yes vote on Sunday but will be impossible if there is a No.

“If the outcome is positive, then there is naturally, on the European side, the willingness to help Greece out of the gutter.”

That Greece is in the gutter and we are not is due to the capacity of the Irish political system and the Irish people to face reality.