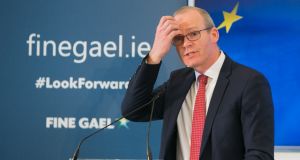 Tánaiste and Minister for Foreign Affairs and Trade Simon Coveney: must let voters know in no uncertain terms the dangers of a hard Brexit have not gone away. Photograph: Gareth Chaney/Collins

With just a week of campaigning left, politicians in the two big parties are still trying to figure out what the voters are really thinking. Are health and housing the only important issues and are the state of the economy and the dangers of Brexit as immaterial as the polls suggest?

Reports from the canvass suggest that Fianna Fáil is ahead of Fine Gael but not by an enormous distance. Minister for Finance Paschal Donohoe faces the challenge of trying to grab the campaign by the neck and force voters to think about what might happen if the economy is mismanaged, just as Brian Cowen did at a similar stage of the 2007 campaign.