Steady as she goes: Budget 2019 dodges the landmines 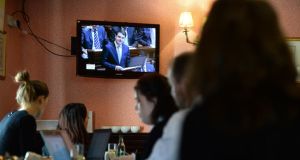 First, do no harm. Any finance minister should heed the primary precept of the Hippocratic oath, and ensure that their fiscal and economic prescriptions do not damage the Government, or the economy.

Paschal Donohoe’s second budget as dual finance and public expenditure minister did not offend the rule.

In politics, when budget day comes round, the rule translates as: don’t step on any landmines.

There are no reports of explosions yet. It’s still possible that one of Donohoe’s budget measures could detonate underneath him, as the small print is parsed and analysed. After all, this is the nature of landmines; if you knew they were there, you wouldn’t step on them in the first place.

But in the crucial few hours after the budget, as the endorsements from special interest groups, industry representatives, NGOs and lobbyists rolled in yesterday afternoon – the National Women’s Council, the American Chamber of Commerce, the Peter McVerry Trust, and dozens of others – a sigh of relief was exhaled in Government Buildings.

There were dissenters, of course. The hospitality industry, hammered by the big Vat increase, was gunning for the head of Minister for Tourism Shane Ross. There were criticisms from the National Youth Council, from some disability organisations, the private hospitals, and others. But overall the general reaction was mildly, cautiously, tentatively positive.

Not in Leinster House, obviously. Fianna Fáil walked the difficult tight-rope to which it has become accustomed – praising the bits of which it claimed authorship, criticising the rest. Sinn Féin thundered against it, and so did the rest of the opposition.

But Leinster House isn’t the target. Budgets are when governments get an opportunity to speak directly to voters on a day when (unusually) they’re paying attention to what politicians say.

So what did it say to them?

It’s hard to discern an overall political theme beyond: steady as she goes. In that, it’s a reflection of its author’s personality and his political positioning – the champion of the steady centre.

With a role ranging across government, his boss’s confidence and backing and a bulging exchequer, Donohoe is the most powerful finance minister since the pomp of Charlie McCreevy.

But McCreevy believed that every budget had to have a surprise, a rabbit-from-the-hat; Donohoe seems to believe the opposite. McCreevy wanted to define himself by his enemies – the “pinko-liberals” who he imagined populated a certain newspaper (okay, this one), the “poverty industry”, the Labour Party.

The social problem of housing and homelessness is the most pressing political issue of the age. Investment is one thing; results are quite another

Donohoe wants to identify and recruit his friends in defence of the political centre. McCreevy loved bold moves (halving capital gains tax; individualisation of the tax system); Donohoe cautiously signals the path ahead. He is the anti-McCreevy.

And so he has crafted a broadly social, democratic budget, using the great majority of available resources for investment in public services in response to perceived public needs.

The overwhelming thrust of the budget was increased public spending, increased investment in public services and in public infrastructure, especially housing.

The tax package is relatively small. In 2016, when the Government was put together, it was agreed that the ratio of spending increases to tax cuts would be about 2:1. In yesterday’s budget, it was more than 12:1.

This is not an ideological conversion – it is a reflection of the public demand that politicians discern. The social problem of housing and homelessness is the most pressing political issue of the age, and the Government is scrambling to meet it. The budget continued the scrambling, to uncertain effect. Investment is one thing; results are quite another.

Voters are unlikely to care much about the leftward shift of the Government’s budgetary stance – what they care about is what works. In that, they are in tune with Donohoe’s political centre which prizes efficacy above ideology. Or as its patron saint Tony Blair said: What matters is what works.

Was it an election budget?

Not in manner of election budgets in the Ireland of (not that) long ago, it wasn’t. Take the last budget before the 2007 general election, delivered in the autumn of 2006. Bertie Ahern’s finance minister Brian Cowen announced personal tax cuts of €1.3 billion (He followed it in 2008 by another three quarters of a billion euros).

Compared to pre-election largesse of that magnitude, yesterday’s €250 million in tax cuts looks rather niggardly. It’s certainly unlikely to win a general election for Fine Gael. But it won’t lose one for the party either.

But budgets are not just about politics; they are about economics, too. Indeed, they are where politics and economics meet.

The fact is that this is a significantly expansionary budget at a time when the economy is growing a fair old clip and when many economists warn that the prudent course is to calm the jets and prepare for a downturn (Politicians point out that most economists do not have to run for election).

All budgets are balancing acts – between politics and economics, what’s popular and what’s wise, what’s desirable and what’s feasible. They also tell us something about the state of our polity. The message of yesterday’s budget was that the Government’s (and everyone else’s) overwhelming priority is now public investment. That will shape politics for some time to come.