Stacking it up – An Irishman’s Diary on the Poolbeg Chimneys 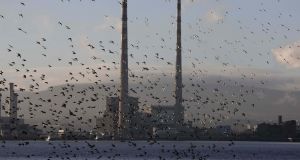 Birds flying past the Poolbeg Chimneys. The first stack was built in 1969 and the second in 1977. Photograph: Tom Honan. 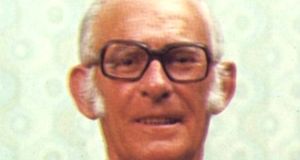 Thomas Murray: chairman and chief executive of the ESB from 1960 to 1975

I have always been a fan of my family’s Poolbeg Chimneys. They are the first thing you see arriving in Dublin by sea or air and often the last thing you see if you’re leaving.

Indeed, in the past 10 years or so, our chimneys have become iconic. There must be hundreds of beautiful paintings which feature or include our chimneys. There are thousands of stunning photographs with our chimneys as the focal point.

Sorry. You may be wondering why I’m using the word “our” in relation to the chimneys – why I’m claiming them for my family.

Well, I have always thought of them as “our” chimneys because my father wrote the cheque to pay for them, metaphorically or otherwise, at least for the first one.

Yes it’s true it wasn’t his own money. But he was chairman and chief executive of the ESB from 1960 to 1975 during which time the first chimney was built and the second was planned.

A year or two before he died in 1978 one of our neighbours gave the family an original painting. It was a view of Dublin Bay from just about the highest point in Mount Merrion where we lived. And at the centre of the painting were, of course, the chimneys.

They are not beautiful. But then, Battersea Power Station in London isn’t beautiful but is iconic. And while the Eiffel Tower is striking it isn’t exactly pretty either.

Dublin has a bit of a thing about chimneys.

The Shanagarry Chimney in Milltown in south Dublin still stands despite all sorts of development around it.

The 28.6 metre (94 feet) chimney, right beside the Luas line, is the last reminder of the Old Dublin Laundry which stood on the site.

It still serves a purpose as a mast for mobile phone companies.

There is another famous Dublin chimney which still stands; though it’s almost impossible for ordinary Dubliners to see, even from nearby roads.

It’s the one in Ballsbridge which was, for years, associated with the Swastika Laundry. And like the red electric vans which traversed the city picking up laundry the chimney had a large swastika on its side.

It was entirely innocent but in my youth I wondered about it as I strolled along the Dodder to Lansdowne Road. The motif was chosen by the laundry’s founder John W Brittain because, when the Leitrim man founded the company in 1912, he chose the swastika symbol because it was an old Indian symbol of good luck.

The first was built in 1969 and the second in 1977. For years they stood there without that much attention being paid to them. There was some criticism of the smoke which we could all see floating out of the chimneys – though it wasn’t smoke at all, it was steam.

I once had a news editor who actually asked me to find out who changed the flashing red bulb at the top of the chimney when it blew. I think he imagined a man with a 680 ft 9 in (207.48m) ladder which he leaned against the chimney before climbing up with a bulb in his back pocket. The second chimney was, by the way, one foot taller at 681 ft 9 in (207.8m) All I could do was laugh and change the subject.

What did fascinate me was what my father told me about the first chimney, built during his tenure at the helm of the ESB.

It swayed in the wind.

He said that if a structure as tall as it was couldn’t sway it would collapse in strong winds. I’m still slightly afraid of the notion that if I stood on top of one of the chimneys in a storm, it would sway from side to side, three feet each way.

I didn’t doubt my father. But I still ask architect friends about the swaying and they have told me that, yes, tall structures do allow for sway.

If the chimneys weren’t already iconic, U2 helped to make them so. They were featured on the video for their major hit Pride (In the Name of Love) which was released almost 40 years ago, in September 1984.

Elvis Costello also used the chimneys as a backdrop for a publicity shot early in his career.

And they featured at the end of the brilliant and moving short film Just Sayin’ written and directed by Dave Tynan and featuring Emmet Kirwan.

“Our” statues are famous, well loved and will, hopefully, be preserved for future generations to see and admire.

Someday, the brave decision will be made to spend the money necessary to give them a makeover and make them safe for future generations.

Hopefully, that day will be soon. And when the decision is made, whoever makes it can rest assured, they have my family’s blessing!